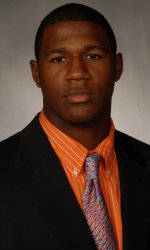 The award is named after former University of Miami All-American Ted Hendricks, who went on to a prominent NFL career.

Branch leads the ACC in sacks with 10.5 and also paces the conference in tackles for loss with 16. He has 72 tackles, second on the Clemson team, and is trying to become the first lineman to lead the Tigers in tackles since 1984 when William Perry paced the team with 100 tackles.

Branch was named first-team All-ACC this year. The native of Richmond, VA had four sacks and six tackles for loss against Virginia Tech on October 1, leading the Tigers to a 23-3 victory over the 10th ranked Hokies. That is Virginia Tech’s only loss of the year. The two teams meet again on Saturday night in Charlotte in the ACC Championship game.