Approximately 10 miles from Clemson’s campus lies Seneca High School, the place Clemson tight end Braden Galloway earned his start in the sport he flourishes in now…football. While he was named region player-of-the-year in basketball, Galloway did not give football a shot until his junior season. But now, he cannot imagine himself playing any other sport.

“It has been really cool and a good experience growing up so close to here as far as getting to see how the program works from the inside out.”

One can imagine how different it must feel to be on the outside as a fan, then as a key cog in one of the most elite programs in the country.

“Actually, getting to be around Coach (Dabo) Swinney and the players and see how the program is run internally was the biggest thing for me.”

Galloway entered the 2021 season with 34 catches for 481 yards and three touchdowns in his career. He is embracing the opportunities that the remainder of this season has to offer.

While the Clemson offense remains young in some areas, Galloway remains confident in the ability of the team’s tight end group.

“We are one of the more veteran groups. We have some young guys, too, but everyone is really stepping up.”

On what he sees his role being in the continued development and success of this offense, #88 was clear.

“It’s about giving guys confidence and letting them know that it’s a long season and you aren’t going to win every battle, but at the end of the day, you have to keep fighting and give it your all every day. Step by step, we will get where we want to be at the end of the year.”

While football remains a large part of his life, he is quick to remind others that it is not his identity.

“The reason why I chose Clemson was because you get to have fun playing ball. I didn’t start playing football until later on, so it was important for me to make sure I would also get an education here. I will be graduating in December, which is a big thing that I came here to do.”

Majoring in sports communication and previously interning with Adobe, Galloway has set himself up for a bright future, wherever that may be.

However, aside from his education, Galloway continues to take advantage of the various opportunities presented to him, especially with the recent enactment of name, image and likeness in college football. In fact, Galloway has over 430,000 followers and 8.2 million likes on TikTok, a short-form video content app.

“I was personally very excited when NIL started to come into play. My girlfriend is popular on social media, and there were a lot of opportunities that I was not able to participate in with her prior to the changes of NIL.”

Given Galloway’s frequent exposure to possible advertisement opportunities last season, he remained in constant contact with Associate Athletic Director of Compliance Amanda Gray Richardson in order to ensure he was doing everything the right way. Therefore, in terms of social media, Galloway was limited in the content that he could both participate in and produce himself. But now, Galloway is free to take advantage of his social media platform.

“For me personally, I am excited that I am able to take advantage of the opportunities that I have had to say ‘no’ to before.”

Opendorse, an athlete marketing platform, recently named Galloway as one of the most marketable players in college football, likely due to the traction that this TikTok videos receive. Despite his overwhelming success on social media, he is focused on “keeping the main thing, the main thing.

“If you go out on the field and don’t perform well and don’t do what you’re supposed to do, then you aren’t really marketable. It means everything for me to be a Tiger.”

Having grown up just outside of the city of Clemson, one can imagine how immensely coveted a position on this Tiger team must be.

“It’s something that I never want to take for granted, because a lot of people wish to be in my position.”

A veteran for the Tigers and now a prominent name in social media, Galloway’s sphere of influence stretches further than he ever fathomed.

“The cool thing about what I have going on is that it’s really separate from football. I like knowing that I am not solely a football player, but I can brand myself in different ways.”

On how he views his position of influence, Galloway was clear.

“The impact that I want to have with the guys is similar to the one I want to have on social media. I want guys to be happy when they are around me. I want to bring a light to others.”

Galloway’s teammates are quick to confirm his love for others. While he gets to play alongside many other athletes, he is even more grateful for the relationships that this team has allowed him to make off the field.

“Five or 10 years from now, you won’t remember the plays you messed up, you’ll just remember the relationships that you had with the guys on the team. I have found guys that will be in my wedding.

“I want to continue to use my platform to make people laugh and bring joy to others, which is what it’s all about for me.”

During his final months as a Tiger, one can expect to see Galloway not only shining amongst his teammates, but bringing joy to others all across the nation via social media. 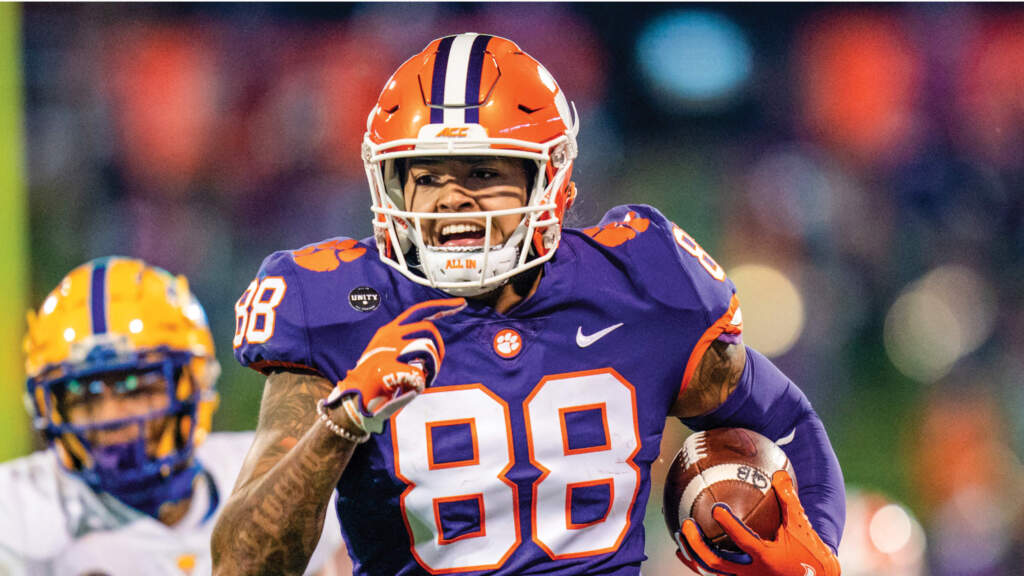