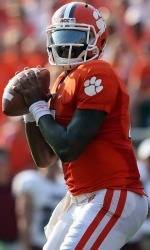 CLEMSON, SC – With his quarterback warming up just prior to the second half Saturday, Clemson defensive end Andre Branch came over to Tajh Boyd, gave him a little pep talk and then patted his young quarterback’s helmet for encouragement.

It was just the thing Boyd, who was making his first start, needed. The Hampton, VA native’s day did not start out as he had planned. He completed just six of 12 passes for 65 yards and was intercepted once in the first half, which led to a Troy field goal.

“It was a little Virginia thing,” Boyd said of his talk with Branch, who like Branch is a native of the Commonwealth. “There was a little head-pop and all. I call him `Big Bro’ and he definitely inspired me, including in the locker room at halftime.

Boyd’s family picked up its young quarterback and inspired him to have one of the best halves in Clemson history as he threw for 199 yards and two touchdowns while connecting on 14-18 passes over the third and fourth quarters as Clemson rallied for a 43-19 victory.

“As I have said many times, Tajh is not going to be perfect,” Clemson Head Coach Dabo Swinney said. “He still has some learning and growing to do as a player, but I’m proud of how he responded. That is what good players do.”

The turning point for Boyd came midway through the third quarter when he hit Jaron Brown for a 19-yard gain to spark an 80-yard scoring drive that gave the Tigers (1-0) the lead for good.

“It was a boost of confidence and that included me as well,” Brown said. “We really wanted to get a good flow going and we really needed to get into a rhythm and that was something that we needed.

“I was fortunate enough to catch the pass and then we kept it going.”

Boyd followed the completion to Brown by completing a third-down pass to tight end Dwayne Allen a few plays later. This time, the pass covered 54 yards with Allen taking it into the end zone to give Clemson a 20-16 lead.

From there, Boyd completed his next 11 passes, 13 straight in all, including his third touchdown toss of the afternoon – a seven-yard pass to Brown. The red-shirt sophomore also completed a 33-yard touchdown pass to freshman Sammy Watkins on the second play of the game.

“Something had to get going and once Jaron made that catch, things started clicking from there,” Boyd said. “I have to control the offense and that is my job as a quarterback. I have to make sure everybody is confident and comfortable.

“That’s something I’m learning how to do at this level.”

Boyd finished his first game as a starter by completing 20 of 30 passes for 264 yards and three touchdowns. Boyd’s day was the second best performance by a quarterback in his first start in Clemson history; bested only by Charlie Whitehurst’s 420-yard day in a win at Duke in 2002.

“I was very impressed with the way Tajh responded in the second half,” Offensive Coordinator Chad Morris said.

Everyone was, including Boyd himself.