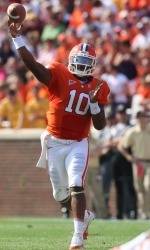 CLEMSON, SC – Clemson quarterback Tajh Boyd is one of 16 semifinalists for the Maxwell Award, the honor presented to the Collegiate Player of the Year by the Maxwell Football Club of Philadelphia.

Boyd ranks third in the nation in touchdown passes with 25, seventh in total passing yards with 2674, 12th in pass efficiency and 16th in total offense in leading Clemson to an 8-1 record and number-11 ranking in the BCS. He has thrown at least one touchdown pass in all nine games this year. He needs just 326 passing yards to become the third quarterback in school history to throw for at least 3000 yards in a season.

The Tigers have this weekend off before meeting Wake Forest on November 12 at Clemson.

Boyd has been named the Manning Award National Quarterback of the Week, more than any other player, and is a three-time ACC player of the Week.