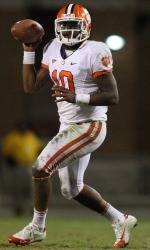 FORT WORTH, TX – The Davey O’Brien Foundation announced today the selection of 16 semifinalists for the 2011 Davey O’Brien National Quarterback Award® (The O’Brien). Narrowed down from all 120 quarterbacks from NCAA Division I Football Bowl Subdivision (FBS) schools, semifinalists were selected by The O’Brien National Selection Committee, with the Fan Vote accounting for five percent of the total vote. The committee was asked to consider the following criteria: quarterback skills, academics, character, leadership and sportsmanship.

Fans may now help determine which three quarterbacks will advance as finalists by voting as often as once daily at www.VoteOBrien.org. Fan voting will close at noon (CT) on Nov. 20. The Foundation and the Selection Committee will announce three finalists on Monday, Nov. 21. The 2011 Davey O’Brien winner will be announced on The Home Depot College Football Awards airing Thursday, Dec. 8 on ESPN.