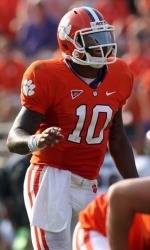 Boyd Named ACC Player of the Week by Rivals.com

CLEMSON, SC – Clemson sophomore quarterback Tajh Boyd has been named ACC Player of the Week for games of September 3 by Rivals.com. The national website selects just one player from each conference each week.

Boyd threw for 264 yards on 20-30 passing in Clemson’s win over Troy on Saturday. He also threw three touchdown passes, a 33-yarder to freshman Sammy Watkins, a 54-yarder to Dwayne Allen and a seven-yarder to Jaron Brown.

Boyd hit just three of his first nine passes and was 6-12 for 65 yards at the half. But, the native of Hampton, VA hit 14-18 passes for 199 yards and two scores in the second half to lead Clemson to a come from behind 43-19 victory. He led Clemson to 30 points and 347 yards of total offense in the second half when he had a passing efficiency of 204.

Boyd, who connected on 13 straight passes at one point, had the second greatest passing day in Clemson history for a quarterback in his first career start. Charlie Whitehurst, now with the Seattle Seahawks, threw for 420 yards in his first start for the Tigers at Duke in 2002.