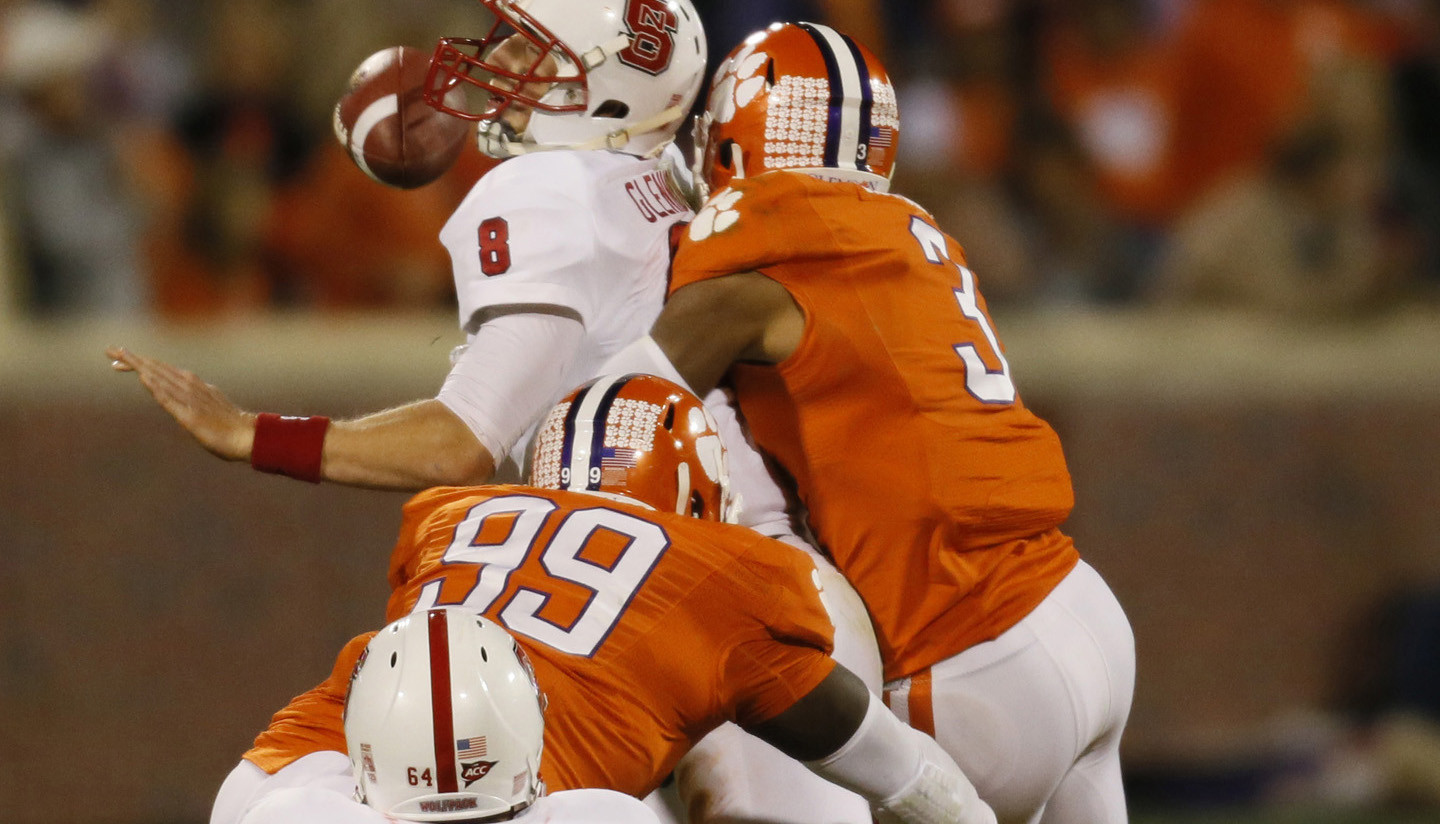 Boyd, Freeman and Beasley Named ACC Players of the Week

Tre Boston, the Defensive Back of the Week, returned an interception 36 yards for a touchdown and Quinshad Davis, the Rookie of the Week, tied an ACC record with 16 catches in North Carolina’s 37-13 win over Virginia. Sylvester Williams, Co-Defensive Lineman of the Week, posted a season-high eight tackles in the Tar Heel victory.

Boston College’s Nick Clancy, the Linebacker of the Week, compiled a game-high 20 tackles in the 30-23 overtime loss against Virginia Tech. Virginia Tech’s Cody Journell, the Specialist of the Week, tied a career high with three field goals made in the win over the Eagles.

OFFENSIVE BACK – Tajh Boyd, Clemson, R-Junior, QB, 6-1, 225, Hampton, Va.Boyd completed 30-of-44 passes for 426 yards and five touchdowns in Clemson’s 62-48 win over NC State. He also had 18 rushes for 103 yards and three touchdowns, giving him an ACC record eight TDR, two more than the previous record. His 529 yards of total offense established a Clemson single-game record, breaking the mark of 517 by Woody Dantzler against NC State in 2001. It was also the fourth highest total in ACC history. His 103 rushing yards made him the first Clemson quarterback with over 100 yards on the ground since Dantzler in 2001 against Duke, and marked the first time a quarterback has rushed for three scores since Dantzler at Duke in 2000.

OFFENSIVE LINEMAN – Dalton Freeman, Clemson, R-Senior, C, 6-5, 285, Pelion, S.C.Freeman started at center for the 47th straight game and played a career high 102 snaps, every one of Clemson’s plays in its 62-48 win over NC State. He graded at 90 percent and had five knockdown blocks as he continually provided holes for a Clemson running game that gained 328 yards on the ground. He also did not allow a sack in 44 pass attempts and was a big reason Clemson gained 754 yards of total offense, second most in Clemson history and most by an ACC team this year. During the game, Freeman became Clemson’s career leader in plays by any Tiger, now with 3208 for his career with two games left.

RECEIVER – Tobais Palmer, NC State, R-Senior, WR, 5-11, 175, Pittsboro, N.C. Palmer set an ACC and NC State record with 496 all-purpose yards against No. 11 Clemson, shattering the previous NC State high mark of 336 held by T.J. Graham, and the previous ACC mark of 411 yards, held by John Leach of Wake Forest (1993). The 496 yards is the second highest in NCAA FBS history. He set a school record for most kickoff return yards in a single game with 277 on the day, just six shy of the ACC record. The previous NC State record was 202 by Graham against Duke in 2009. Palmer also finished with a career-best 219 yards receiving and three touchdown catches. The 219 yards receiving is the third most in a game in NC State history, only Torry Holt (twice in 1998) had more receiving yards in a single game. The 219 yards is the highest receiving output in the ACC in 2012.

CO-DEFENSIVE LINEMAN – Vic Beasley, Clemson, R-Sophomore, DE, 6-3, 225, Adairsville, Ga.Beasley had three sacks in Clemson’s 62-48 win over NC State, a new career high and the most by a Clemson player in a single game this year. He finished with four tackles overall and had a caused fumble as his pressure on NC State quarterback Mike Glennon was a key during Clemson’s 42-0 run between the second and third periods.

LINEBACKER – Nick Clancy, Boston College, Senior, LB, 6-3, 232, Plainfield, Ill. Clancy led Boston College’s defense with a game-high 20 tackles (17 solo and three assisted), including 2.5 tackles for loss and two pass breakups in the Eagles’ 30-23 overtime loss against Virginia Tech in his final game at Alumni Stadium. Clancy’s performance marked the second time this season an ACC defender recorded at least 20 tackles. Clancy, the league’s leading tackler with 127 tackles through 11 games, owns both performances, having previously recorded a career-high 24 tackles (14 solo, 10 assisted) at Northwestern on Sept. 15. Saturday’s game against Virginia Tech also marked just the 14th time in school history that a player has registered 20 or more tackles in a game.

DEFENSIVE BACK – Tre Boston, North Carolina, Junior, S, 6-1, 190, Ft. Myers, Fla.Boston posted 13 tackles and scored his first career touchdown on a 36-yard interception return in the second quarter against Virginia. Boston caught the ball near the right hash and ran diagonally across the field before running over a would-be tackler at the goal line. The interception was Boston’s fourth of the season and the eighth of his career. Prior to Virginia’s last two drives, which ended on turnovers on downs, North Carolina limited the Cavaliers to 279 total yards of offense.

SPECIALIST – Cody Journell, Virginia Tech, R-Junior, K, 6-0, 195, Ripplemead, Va.Journell tied a career high in points (12), field goals attempted and made (3) and for his longest made kick (42) in Virginia Tech’s 30-23 overtime win at Boston College. The junior tied his career long with a 42-yarder in the fourth quarter and then made a 41-yarder with a little over a minute to go in regulation to tie the game and force overtime. He has made 17-of-20 fields goals this season and is 4-for-4 on game-tying, lead-changing or game-winning field goals in the last three minutes of the fourth quarter or in overtime for his career, all coming this year.

ROOKIE – Quinshad Davis, North Carolina, Freshman, WR, 6-4, 185, Gaffney, S.C.Davis helped lead Carolina to a 37-13 win at Virginia with 16 catches, tying the ACC record for all players, and 178 yards. Davis is one of six ACC players with 16 receptions in a game. He also set the single-game freshman records, which previously were nine catches (Octavus Barnes vs. Texas, 1994 Sun Bowl) and 171 yards (Hakeem Nicks at Notre Dame, 2006). Davis also established a new school record for receptions in a season by a freshman with 52. Davis ranks tied for fifth in ACC history for catches by a freshman and seventh in receiving yards by a freshman.