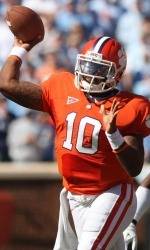 CLEMSON, SC – Clemson quarterback Tajh Boyd and wide receiver Sammy Watkins are among 18 players listed as preseason Watch List candidates for the Heisman Trophy according to the website Heismanpundit.com. The site is not affiliated with the New York Downtown Athletic Club, which selects the winner each December.

Boyd was the first-team All-ACC quarterback last year as a sophomore when he threw for a Clemson record 3828 yards and 33 touchdown passes. He set an ACC record for touchdown responsibility with 38 scores rushing and passing, and became the first Clemson player in history to go over 4,000 yards in total offense in one season (4046). He quarterbacked Clemson to its first ACC title in 20 years.

Watkins was a first-team Associated Press All-American as an all-purpose player as a freshman, just the fourth true freshman in college football history to make first-team AP All-American. The receiver from Fort Myers, FL collected 82 receptions for 1219 yards and 12 touchdowns. He set Clemson single season records for reception yards and reception touchdowns and led all freshmen nationally in receptions. He was also named the ACC Rookie of the Year.

The website also ranked ACC players as far as their candidacy for the Heisman. Boyd was rated first, while Watkins was fourth. Clemson running back Andre Ellington was also in the list of ACC players at number-six.

Clemson plays its season opener on September 1 against Auburn at the Georgia Dome.