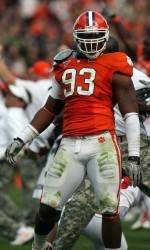 Bowers One of Six Finalists for 2010 Hendricks Award

CHICAGO, IL – The Ted Hendricks Foundation is pleased to announce the finalists for the 2010 Ted Hendricks Defensive End of the Year Award. Nineteen players received votes in the preliminary round this season. Six have advanced to the final ballot.

This year’s finalists are as follows:

Da’Quan Bowers – CLEMSON6’4″, 275 lbs, JR Bowers, an AFCA first-team All-America selection, leads the FBS with 15½ sacks – a total that ranks second in Clemson history. An additional sack in postseason play will move Bowers into third place all-time in ACC single -season history, and will be the highest conference total since 1996. Bowers also ranks second in FBS tackles-for-loss with 24½. In the Tigers’ 12 games this season, Bowers recorded five multiple-sack games and a season-high three against Maryland. He was named first-team All-ACC this week and is also a finalist for the Lombardi, Bednarik and Nagurski Awards.

Adrian Clayborn – IOWA6’4″, 285 lbs, SR Clayborn is a first-team AFCA All-America selection and was named to the All-Big Ten first team as well. He is just the eighth Iowa Hawkeye player to be honored by the AFCA. Clayborn recorded 51 tackles, 3½ sacks and 7 tackles-for-loss this season – statistics that do not rank among the leaders for 2010. However, coaches throughout the country and many members of the Hendricks Award’s selection committee regarded him as one of the most dominant defensive players in the nation. Clayborn has participated in relief efforts for several communities in Iowa and Louisiana and is a member of the Iowa Student Athlete Advisory Committee.

Ryan Kerrigan – PURDUE6’4″, 263 lbs, SR This week, Kerrigan was named a first-team All-America honoree by the AFCA. He also became the first Purdue player to receive Big Ten Defensive Player of the Year honors since 1992. Additionally, Big Ten coaches honored him as the conference Defensive Lineman of the Year. Kerrigan’s statistics are among the nation’s leaders: 2.17 tackles-for-loss per game (1st), 1.04 sacks per game (2nd), 0.42 fumbles forced per game (T-2nd). He recorded ten or more tackles in three of Purdue’s 12 games this season and had a season-high four sacks against Michigan.

Von Miller – TEXAS A&M6’3″, 243 lbs, SR Miller, a senior from DeSoto, TX, enjoyed a breakout season for the Aggies last season and followed it up with a great one this fall. His 9½ sacks rank 17th in the FBS this season. He also recorded 14½ tackles-for-loss, 6 QB hurries, an interception and 3 forced fumbles. Miller is considered a hybrid end/linebacker, and played a considerable number of snaps as a 2-point end. This is precisely the position Ted Hendricks played while at the University of Miami. Miller also received first-team All-Big 12 honors this fall and received honorable mention as the conference Defensive Player of the Year.

Jaball Sheard – PITTSBURGH6’4″, 260 lbs, SR Sheard is one of four Hendricks Award finalists that was named to the AFCA’s All America team. He is among the FBS leaders in sacks (15th) and forced fumbles (T-5th), and recorded 12½ tackles for loss (2nd in the Big East). Sheard distinguished himself as a top defensive end this fall following a season-ending injury to teammate Greg Romeus. He has recorded multiple-sack games four times in the Panthers’ 11 contests this season.

J.J. Watt – WISCONSIN6’6″, 292 lbs, JR After originally accepting a scholarship to attend Central Michigan, Watt had a change of heart and decided to become a walk-on at Wisconsin. Badger coaches quickly recognized Watt’s considerable skills and awarded him a scholarship before he could even take a snap in a game. Watt finished this, his junior season, with 7 sacks, 21 tackles-for-loss (3rd in the nation), 10 QB hurries, 3 forced fumbles and 3 blocked kicks. Watt was also named a first-team All-Big Ten honoree. He is currently in the process of creating the Justin J. Watt Foundation to benefit elementary and middle school athletic programs in the Pewaukee, Wisconsin area.