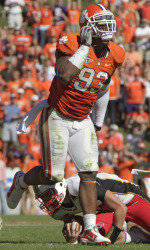 Bowers leads the nation in sacks (9) and tackles for loss (15.5). His nine sacks through six games are the most at this point in the season in Clemson history. He has 37 tackles for the season, third on the team, but 33 are first hits, a team best. He also has a team best 10 quarterback pressures.

McDaniel, a senior from Tallahassee, FL who was a first-team All-American last year is second on the team in tackles with 38. He also has four tackles for loss and two interceptions. His interception against Maryland last Saturday was the 13th of his career, fourth best in Clemson history.

Tickets are still available for the Clemson vs. Georgia Tech game this Saturday, October 23 at 3:30 PM.

Tickets are also now available at a discount for Clemson’s home game against N.C. State on November 6. Adult tickets are $24 each and youth tickets (18 and under) are $10 each for the game against the Wolfpack. Tickets may be purchased online at ClemsonTigers.com or by phone at 1-800-CLEMSON.