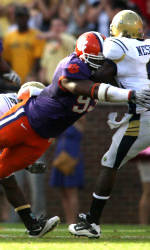 CLEMSON, SC – Clemson defensive end Da’Quan Bowers has been named one of 12 semifinalists for the 2010 Lombardi Award. The award goes to the top lineman in college football.

Bowers leads the nation in tackles for loss with 17.5 and in sacks with 10. He needs just three sacks to establish the Clemson single season record for sacks by a defensive lineman. He ranks second on the Clemson team in tackles.

Bowers and the Tigers take on Boston College in Chestnut Hill, MA on Saturday. Ten defensive and two offensive players comprise the list of 12 semifinalists. The Rotary Lombardi Award will be announced on December 8 at the George R. Brown Convention Center in Houston.

The Big 10 Conference leads the pack with four players, followed by the Big 12 with three, the SEC and the ACC with two each and one from the Mountain West. Florida State’s Rodney Hudson is the only other ACC player on the list.

Tickets are now available at a discount for Clemson’s home game against N.C. State on November 6. Adult tickets are $24 each and youth tickets (18 and under) are $10 each for the game against the Wolfpack. Tickets may be purchased online at ClemsonTigers.com or by phone at 1-800-CLEMSON.