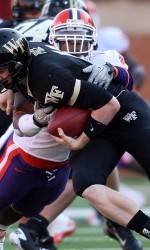 CLEMSON, SC – Clemson defensive end Da’Quan Bowers has been named one of three finalists for the 2010 Chuck Bednarik Award. The honor is presented each year to the top defensive player in college football by the Maxwell Football Club of Pennsylvania.

Bowers is one of three finalists for the award and is joined by Nick Fairley of Auburn and Patrick Peterson of LSU. All three players are juniors.

The Nagurski Award will be presented in Charlotte on December 6, the Lombardi Award in Houston, TX on December 8 and the Bednarik Award in Orlando, FL on December 9.

Bowers leads the nation in sacks with 15.5, three more than any other FBS player. His 15.5 sacks are more than 23 FBS teams and rank as the seventh most in ACC history. He is just half a sack short of the Clemson single season record of 16 set by Keith Adams in 1999. Bowers has a sack in nine straight games, a Clemson record.

He also has 24 tackles for loss, second best in the nation, and 63 total tackles, second on Clemson’s team that ranks ninth in the nation in scoring defense.

Bowers and the Clemson Tigers meet South Carolina at Clemson on Saturday night at 7:00 PM in a game that will be televised by ESPN2.