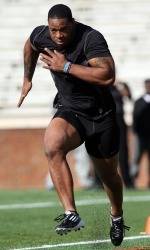 Bowers ran the 40-yard dash three times and also did a three-cone drill and various other agility drills that are designed to evaluate linemen. Former teammates Miguel Chavis, Jamie Cumbie and Jarvis Jenkins also worked out on Friday for the scouts.

A total of 41 people affiliated with NFL teams were in attendance on Friday. The list included one general manager, one head coach, three player personnel directors, one defensive coordinator, four defensive line coaches and 31 scouts. Twenty-four of the 32 NFL teams were represented. The Atlanta Falcons had the biggest contingent with six people, while the Arizona Cardinals had five.

Bowers was pleased with his performance. “It was a good day. I could have done better with my 40-time, but I am about a month behind because of the knee surgery I had in January. I thought I did well in the drills.

Bowers has been invited to the NFL draft in New York in late April, but has not decided if he will attend. “This is a big thing for my hometown (Bamberg, SC) and for my family. I have thought about sharing it with them in Bamberg. I will make a decision the week of the draft.”

Bowers played three years for the Tigers (2008-10), including the 2010 season when he led the nation in sacks with 15.5 and finished second in tackles for loss with 26. He was a unanimous first-team All-American, just the fourth in Clemson history. He was also named the ACC Defensive Player of the Year and won the Bronko Nagurski Award as the top defensive player in the nation as chosen by the Football Writers Association of America.