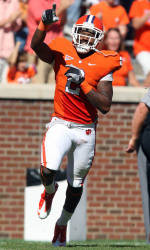 CLEMSON, SC – Clemson defensive leaders Da’Quan Bowers and DeAndre McDaniel have been named All-Americans by Rivals.com. Bowers was named to the first team, while McDaniel was a third-team selection. The two players are the top tacklers on Clemson’s defense that is ranked ninth in the nation and first in the ACC in scoring defense this season.

Bowers leads the nation in sacks with 15.5 and is second in tackles for loss with 25. His sack total is second in Clemson history for one season, best among defensive linemen and is the most by an ACC player since 1999 when Keith Adams had a Clemson record 16 sacks. He has 67 tackles to rank second on the Clemson team.

Bowers’s tackle for loss total is the most by a Clemson defensive lineman since 1991 when Rob Bodine had 27. The native of Bamberg, SC, had a streak of nine straight games with a sack during this season, the longest streak in Clemson history. Last week, Bowers was named the ACC Defensive Player of the Year.