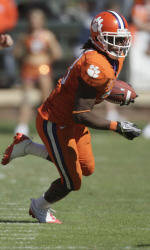 CLEMSON, SC – Clemson defensive end Da’Quan Bowers was named one of two National Defensive Players of the Week by the College Football Performance Awards website for games of October 16. Bowers had three sacks in Clemson’s win over Maryland. J.J. Watts of Wisconsin was also honored by the Website. Clemson’s Andre Ellington was honored by the same website as the National Kickoff Returner of the Week.

Bowers had three sacks and four total tackles for loss among his six tackles, in leading Clemson’s defense in a 31-7 win over Maryland. All three of his sacks were in key third-down situations. The biggest took place in the second period. With Clemson leading 10-7, Maryland had the ball on the Clemson seven with a third-and-one. Bowers sacked Maryland quarterback Danny O’Brien to force Maryland into a field goal attempt, which they missed, allowing Clemson to hold the lead.

Bowers sack total against Maryland was a career high and he became the first Tiger since 2001 to record three sacks in a game. Bryant McNeal had three against Duke that year. Bowers now has nine sacks and 15.5 tackles for loss for the season, best in the nation in each category. He already has more sacks than any Tiger has had for a season since 2006 when the late Gaines Adams had 12.5 in a first-team All-American season. Clemson has played just six games so far this year.

Ellington had two kickoff returns for 122 yards, including an 87 yarder for a touchdown in the second period that turned the game in Clemson’s favor. Clemson trailed 7-3 when Ellington took it all the way back for a score, giving the Tigers a 10-7 lead. Clemson would not trail the rest of the game. Ellington also had 41 yards rushing and scored another touchdown on scrimmage plays.

Clemson sophomore defensive back Xavier Brewer was an honorable mention selection by the website for the defensive back position. Brewer’s 61-yard interception return for a touchdown gave Clemson a 31-7 lead in the fourth period. It was his second interception of the year and first pick six for a score by a Clemson player this year.