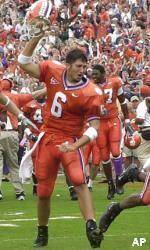 Bowden, Whitehurst Families To Be Featured On Southern Sports Report

Throughout August, FSN South’s live, nightly (10 p.m.) SOUTHERN SPORTS REPORT continues its emphasis on the region’s passion for the college game – particularly within the Atlantic Coast and Southeastern Conferences. “Football Class” is in session each night, with features, analysis and behind-the-scenes glimpses into what fans need to know to prepare themselves for the start of the 2004 season.

Clemson’s Tommy Bowden and Charlie Whitehurst will be featured in the coming days along with their families.

SATURDAY, 8/21 – A glimpse inside the Bowden clan includes golf course and beach time visits with college football coaching’s most involved family, at its annual, offseason, get-together at Panama City Beach, Fla.; and, it reveals who’s the real boss of the family!;