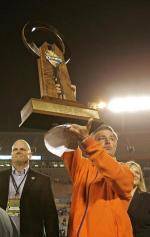 Bowden Named Coach of the Year

Clemson Head Coach Tommy Bowden is the recipient of the 2005 Grant Teaff Coach of the Year Award presented by the Fellowship of Christian Athletes. The award is named in honor of the former Baylor Coach who is the president of the American Football Coaches Association.

Bowden led the Tigers to an 8-4 record and #21 final national ranking during the 2005 season. Clemson finished strong with six wins in its last seven games, including a 19-10 win over Big 12 North Champion Colorado in the Champs Sports Bowl. It marked the first time since 1991 that Clemson has won six of its last seven games. The Tigers had three wins over top 20 teams during the year, the first time Clemson has had three top 20 wins in the same season since 1989 and just the fourth time in school history.

Late in the year, Clemson defeated Florida State and South Carolina, holding the teams coached by Bobby Bowden and Steve Spurrier, respectively, without an offensive touchdown, a first for any school against the two future Hall of Fame coaches noted for offensive innovation. The victories represented the sixth and seventh wins for Bowden in the last three years over coaches who have won the National Championship.

Clemson’s defense finished the year ranked in the top 25 in scoring, rushing, total and pass efficiency, just the third Clemson team to accomplish that feat in the same year. Clemson’s offense ranked fifth in the nation in completion percentage and ranked second in the ACC in total offense, tied for first in Atlantic Coast Conference games. It was the eighth most improved team in the nation in terms of total offense.

“It means quite a bit to receive an award named after Grant Teaff,” said Bowden. “He has given so much to college football as a coach and administrator for nearly 40 years. It also means a lot to receive an award from the Fellowship of Christian Athletes. I have been involved with FCA at every stop in my career because it has such a positive impact on student-athletes nationwide.”