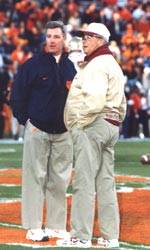 Clemson Practice BriefAugust 13, 2001Clemson, SC – The Clemson Tigers practiced once outside and once inside on Monday. The team had taken Sunday off to participate in Fan Appreciation Day. But, it was back to work on Monday.

Clemson Coach Tommy Bowden had his team go through its normal three hour practice in the morning. The team then worked inside for about 90 minutes in the late afternoon. A heavy thunderstorm moved at 4:00 PM in the Clemson area moved the team inside. The defense practiced in the Jervey Gym and the offense worked in Field Fieldhouse.

Bowden is looking forward to watching his team work in full gear for the first time Tuesday. “We will do some one-on-one early,” said Bowden. “I am anxious to see how the young defensive linemen and defensive ends do tomorrow. They will have to line up against some veteran offensive linemen. It will be face to face. I will be interested to see how they respond to the challenge. They have been enthusiastic so far.”

Bowden did single out freshman running back Kyle Browning from the Monday morning practice. “Kyle has looked good so far. His offense at Union high school was the same as ours, even much of the terminology was the same and it has allowed him to adjust. He has shown some speed, a good quick start.”

Bowden also reported that freshman Eric Coleman would join the team on Tuesday. Coleman will start out as a tight end. He is from Charlottesville, VA and played at Fork Union Military Academy last year. He had 17 catches on offense and 15 sacks on defense last year at Fork Union.

Clemson had been practicing in the Jervey Meadows behind centerfield of Doug Kingsmore Stadium. The team will move to the regular practice fields on Tuesday.