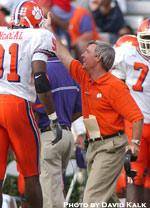 Clemson has posted an 8-4 record this year, including consecutive victories over Florida State, Duke and South Carolina, by a 129-34 margin to end the season. Clemson has been selected for the Chick-fil-A Peach Bowl, the fifth consecutive year Bowden has taken Clemson to a bowl. He is the first ACC coach in history to coach a conference school to a bowl game in each of his first five years with a league program. Bowden was named ACC Coach of the Year on Monday, the second time in his Clemson tenure he has won the award.

This season has included many landmark accomplishments. The Tigers gained a 26-10 triumph over third-ranked Florida State on November 8, the highest ranked team Clemson has beaten in the history of the program and the highest ranked win for any ACC team this year.

The Tigers also defeated a ranked Virginia team in overtime 30-27, gained its largest margin of victory over ACC rival Georgia Tech in 100 years (39-3), and defeated state rival South Carolina 63-17 last Saturday, Clemson’s highest scoring output against the Gamecocks in history. It was also Clemson’s largest margin of victory over South Carolina since 1900. It gave Bowden wins over two of the top eight winningest coaches in Division I college football history, his father, Bobby Bowden, and Lou Holtz, within a three-week time period.

Off the field, Clemson graduated 47 of 59 (80 percent) scholarship seniors in Bowden’s first four years and four of those student-athletes are still in school. Additionally, eight of the 16 scholarship seniors on the 2003 team have already graduated and the remaining eight are on pace to graduate by May. Earlier this year Clemson ranked 11th in the nation, second among public institutions in the NCAA graduation rate study for scholarship football signees who entered Clemson in 1999.

Bowden’s yearly contract compensation remains the same. It is worth $1.1 million per year with the potential to earn $1.4 million. The potential to earn additional income is based on the number of regular season victories and/or performance in postseason play. The compensation package is funded through revenues generated by the athletic department, as well as external compensation from radio/TV, endorsements and speaking engagements. There are changes in the buyout provisions (see below).

“I was pleased when Dr. Phillips approached me about a contract extension,” said Bowden. “The compensation level of the contract does not have an impact on recruiting, so I did not seek additional salary, but the length of the contract can have a significant impact (on recruiting).

“This contract shows the University has confidence in my abilities to guide this program for the long term. We have made progress over the last five years overall, and this season in particular. However, we strive for more.

“As I said in my press conference after the South Carolina game, Clemson is a special place to our family. My two children currently attend Clemson and will earn college degrees here. I am honored to represent the school as its football coach and look forward to working here for many years to come.

“As I stated prior to the South Carolina game, I am very proud of Coach Bowden, his staff and players,” said Dr. Phillips. “They showed great resiliency and great character over the course of the season. We have made considerable progress in all areas of the program, including on the field and in the classroom.

“This football program is on solid ground. We have reached significant accomplishments this year with 16 underclassmen starters. Next year we should have 57 lettermen returning, the most (returning lettermen) in our history. We look forward to the Chick-fil-A Peach Bowl this year, but the outlook for this program for years to come is bright.

“Coach Bowden and I agree that we have some challenges to face in order to bring this program to the next level. We need to continue to address our facilities and that will be a top priority in the coming months.

” This contract extension shows that we have total confidence in Coach Bowden’s abilities to lead this program, and we look forward to having him as our coach for the long term.”