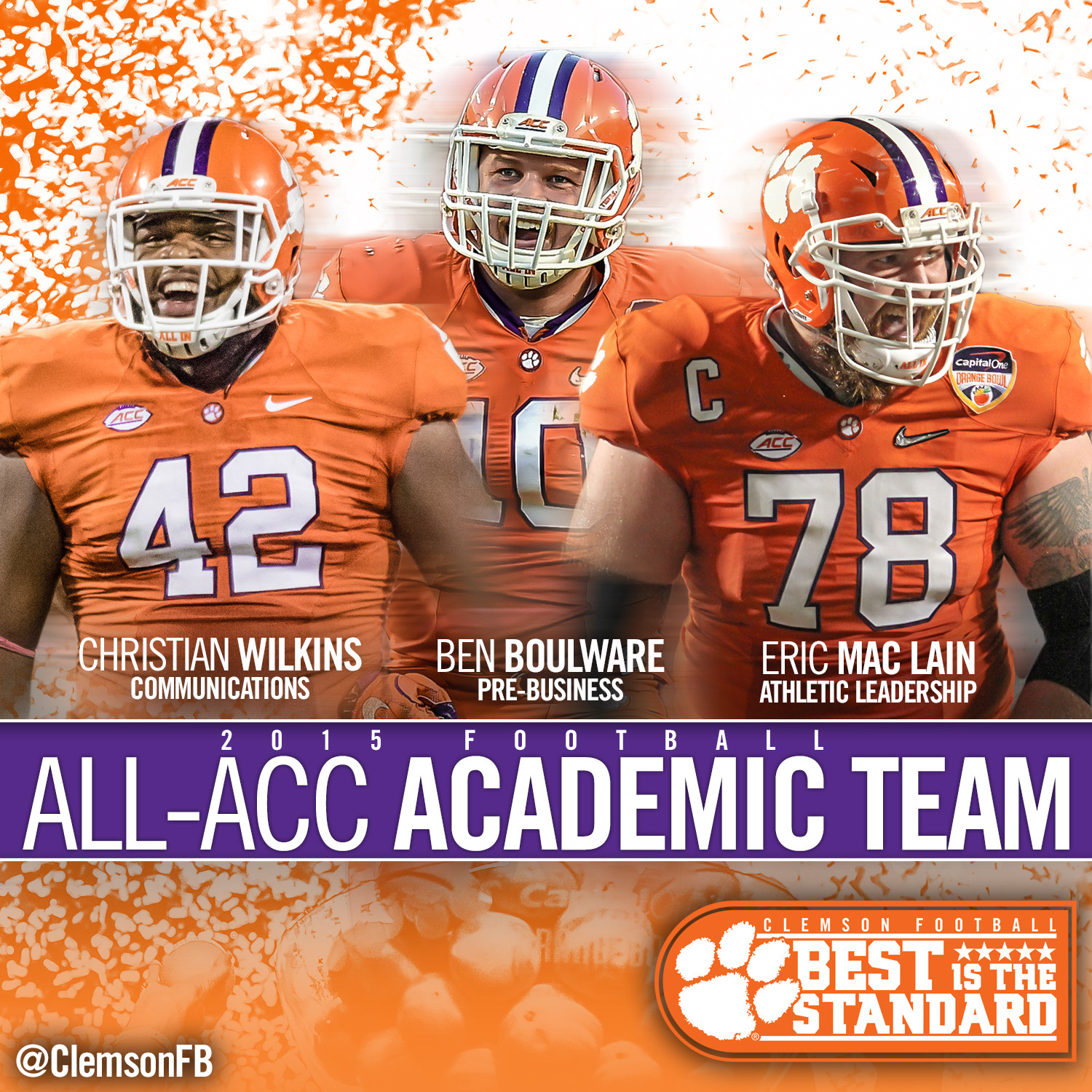 Clemson, S.C.—Ben Boulware, Eric Mac Lain and Christian Wilkins were all named to the Academic All-ACC football team on Wednesday.  The squad was  announced by the ACC Commissioner John Swofford.

To be eligible for consideration for the team, a student-athlete must have earned a 3.00 grade point average for the previous semester and maintained a 3.00 cumulative average during his undergraduate academic career. Graduate students needed to maintain at least a 3.5 grade point average for both the previous semester and for their graduate school careers.

All 14 ACC schools were represented on the team. The ACC has selected an All-ACC Academic Football team every year since 1954.  The team was chosen from a pool of 140 ACC football student-athletes who were nominated by their schools.

Boulware and Mac Lain both made the first-team All-ACC squad on the field as chosen by the ACC Coaches this year.  Boulware and Mac Lain were the first Clemson student-athletes to make the All-ACC team on the field and in the classroom in the same year regardless of position since 2012 when Dalton Freeman and Brandon Ford accomplished the feat.  Clemson and Duke were the only schools with two players named first-team All-ACC on the field and in the classroom.

Boulware  was named Academic All-ACC for the second time in his career, as the junior was also named as a freshman in 2013.  Boulware is the first Clemson defensive player named first-team All-ACC on the field and in the classroom in the same year since 1988 when Mark Drag was named.

Boulware, a business major,  finished the year with 138 tackles, second on the team behind senior B.J. Goodson (160).  The native of Anderson, S.C. also had eight tackles for loss, 3.5 sacks, seven passes broken up, two interceptions and a team best 23 quarterback pressures.  He was named the Defensive Most Valuable Player of Clemson’s Orange Bowl victory over Oklahoma.

Mac Lain graduated from Clemson in December and studied athletic leadership this past semester as a graduate student.  He was named first-team All-ACC by the ACC Media and the Coaches.  He started all 15 games in 2015 and was a major reason Clemson became the first ACC school with at least 4,000 yards passing and 3,000 rushing in the same season.

Wilkins was named a first-team Freshman All-American in addition to his academic honors.  The freshman communications major from Springfield, Mass. finished the season with 84 tackles, seventh best on the 2015 team, but second among returning players for 2016.  He had 4.5 tackles for loss, including a pair of sacks.