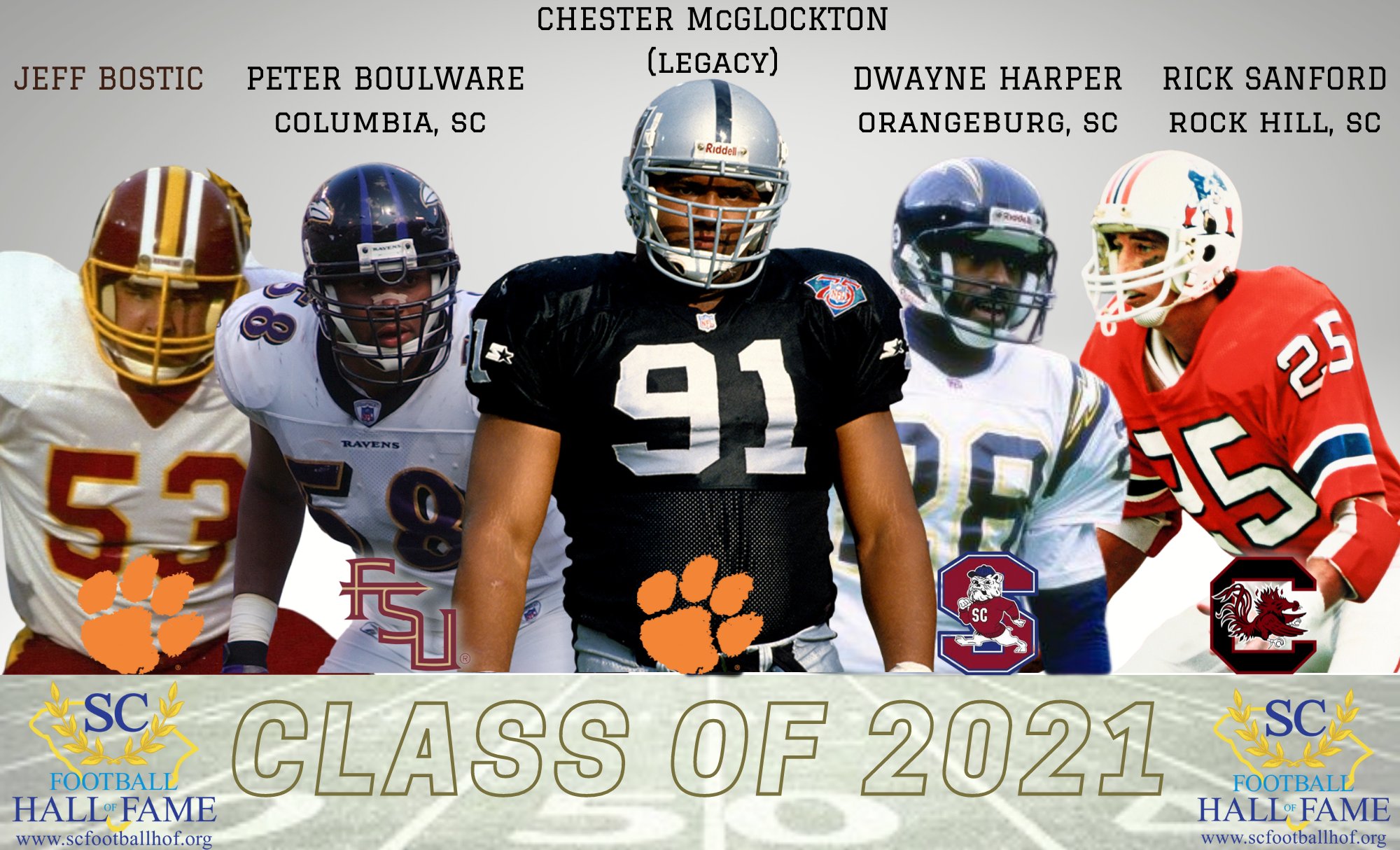 Greenville, S.C.: The South Carolina Football Hall of Fame (SCFHOF) is announcing the Class of 2021 and information on the upcoming ceremony. The 9th Annual Enshrinement Ceremony and Benefit is set for April 29, 2022 at the Hilton Greenville on Haywood Rd. The fun starts at 5:30pm. Legendary SC State head coach and SCFHOF Class of 2013 Inductee Willie Jeffries is scheduled to help host this year’s festivities. The 2021 Blanchard-Rogers Trophy and 2021 Humanitarian of the Year recipients will also be honored at the ceremony, along with the 2022 Bridge Builder Excellence Award winner. Purchase your seats, tables of 10, and Honoree sponsorships at www.scfootballhof.org/shop.

Limited seating for the April 29th event is available for purchase. Your seat is on sale now at www.scfootballhof.org/shop until April 8th or while supplies last.

About: The SCFHOF is a 501(c)(3) “For Impact” organization whose mission is to honor South Carolina football legends and help lead South Carolina students to the Top 10 states in the country for college and career readiness by December 31, 2030. The SCFHOF is on a mission, celebrating excellence and educating, empowering, and encouraging ourselves and others to live in purpose to bring out the best for our South Carolina Community. The SCFHOF believe that with your support SC students can be Top 10 nationally in college and career readiness by December 31, 2030. (Ranked 43rd nationally in 2019 by U.S. News & World Report)

The SCFHOF invites you to play your role in this worthwhile legacy. Become a member at scfootballhof.org, join the movement today! #SCTop10N2030

Jeff Bostic
Jeff Bostic is a Greensboro, NC native that played center for the Clemson Tigers (1977-1979) and was an All-ACC performer in 1979. After college, Bostic was signed as a free agent by the Washington Redskins (now Commanders) in 1980. He would go on to play in four Super Bowls winning three. He was a 3 x Super Bowl Champion (XVII, XXII, XXVI) and was named to the 1983 Pro Bowl during his 14 NFL seasons in Washington (1980-1993). Bostic would start 149 games plus all three Super Bowl wins and was part of the famous and legendary Washington offensive line called “The Hogs”. He is the only Clemson player to have played for three Super Bowl Championship teams. Bostic also is the only center in NFL history to snap the ball to three different Super Bowl Champion quarterbacks Joe Theismann, Doug Williams, and Mark Rypien.

After his playing days, he received accolades including being named to Clemson’s All-Centennial Team in 1996 and inducted into the school’s Hall of Fame in 1997. He was named as one of the 70 Greatest Redskins and is in the Washington Commanders Ring of Fame. Bostic is a 1999 inductee of the South Carolina Athletic Hall of Fame.

Peter Boulware
Peter Boulware was born in Columbia, SC, went to Heathwood Hall and then graduated from Spring Valley High School. The All-State football player would go on to play defensive end and outside rush linebacker at Florida State (1993-1996) and legendary Coach Bobby Bowden. FSU would win a National Championship in 1993, his freshman year, as a redshirt. After that he would terrorize the ACC through 1996 racking up tackles for loss and sacks. As a redshirt junior in 1996 he would eclipse an FSU single season record with 19 sacks, adding 20 TFLs, seven forced fumbles, and three fumble recoveries. That performance would earn him consensus first team All-American status, All-ACC, ACC Defensive Player of the Year, and National Defensive Player of the Year by Football News. He would also graduate with a degree in management information systems.

Boulware was drafted 4th overall of the 1997 NFL Draft in the 1st round by the Baltimore Ravens and played for them for nine seasons. Boulware would go on to win NFL Defensive Rookie of the Year (1997), become a Super Bowl XXXV Champion in 2001, and was named to four Pro Bowls (1998, 1999, 2002, 2003). He was also named as a second team All-Pro in 1999. Boulware would finish his career playing 126 games with a Ravens franchise record of 70 sacks and later named to the Baltimore Ravens Ring of Honor (2006). He is a 2004 inductee of the Florida State Athletic Hall of Fame.

Dwayne Harper
Dwayne Harper was born in Orangeburg, SC and graduated from Orangeburg-Wilkinson High School. He played his college ball for his home team, the South Carolina State University Bulldogs (1985-1987). In 1986, he put himself on the map with 1st Team All-MEAC honors. Harper followed that up his senior season by intercepting eight passes (tied-program record at the time), was named 1st Team All-MEAC, and an Associated Press DII All-American. The Bulldog defensive back was drafted in the 11th round of the 1988 NFL draft by the Seattle Seahawks. He would go on to play six seasons with the Seahawks, five with the San Diego Chargers, and one season with the Detroit Lions.

Harper started at corner for the Chargers in Super Bowl XXIX and racked up 571 total tackles in 148 career games. He started 128 of those games and recorded at least 3 interceptions in five of his 12 seasons. Harper added seven career fumble recoveries and a touchdown to his turnover stats. He was named to the MEAC Hall of Fame for their Class of 2019 and is a member of South Carolina State’s All-Centennial Team.

McGlockton played for Coach Danny Ford and later Ken Hatfield at Clemson (1989-1991). He scored a touchdown as a freshman defensive lineman in the 1989 Gator Bowl vs. West Virginia. He was a 1st round pick (16th overall) by the LA/Oakland Raiders in 1992. McGlockton played six seasons with the Raiders earning four pro bowls during that time. Between the seasons of 1994 and 1997 he was a 4 x Pro Bowler and named All-Pro three times. After playing with the Raiders, he anchored the defensive line for the Chiefs (1998-2000) for the Broncos (2001-2002), and then retired after a season with the New York Jets in 2003.

McGlockton accumulated 551 total tackles including 51 sacks and four interceptions in 12 seasons and 179 games as a defensive tackle. After his football playing days, he spent a couple years coaching with the University of Tennessee and Stanford University. He is a 2011 inductee of the South Carolina Athletic Hall of Fame.

Chester tragically passed away at the age of 42 from the consequences of left ventricular hypertrophy on November 30, 2011. His wife Zina McGlockton will be attending the April 29th event at the Hilton Greenville to accept the honor, recognition, and induction on Chester’s behalf.

Rick Sanford
Rick Sanford was born in Rock Hill, SC and graduated from Northwestern High School. His great play at the high school level led him to play collegiately at the University of South Carolina (1975-1978). At South Carolina, Sanford earned 1st Team All-American status as a defensive back from the Sporting News, as well as 1st Team All-American recognition among Independent Schools.

He became the first 1st round draft pick in Gamecock history in the 1979 draft when he was selected 25th overall by the New England Patriots. He set the longest interception return record in Soldier Field on a 99-yard pick six on Bears QB Jim McMahon. In 1983, he was named as an NFL All-Pro for his career high 133 total tackles and 7 interceptions that season. After that season was given the Patriots Unsung Hero Award by the Patriots Fan Club. Overall, he totaled 16 career interceptions and 3 defensive touchdowns as a safety. Sanford would play 94 games over seven seasons as a defensive back and returner in the NFL, six with the Patriots (1979-1984), and one with the Seattle Seahawks (1985). Sanford is a 1998 inductee of the South Carolina Athletic Hall of Fame and is on their Board of Directors.