When I learned of Bobby Bowden’s passing on Aug. 8, the following thought occurred to me. Bowden defeated Clemson 14 times during his career, more than any other coach, yet he had the most positive impact on the Tiger program among all opposing head coaches.

I cannot think of another program in the nation where that is a true statement.

When you look at some of the wins his Florida State teams had over the Tigers during his incredible career, they were, well, gut-wrenching. At the top of the list would have to be the “Puntrooskie” game in 1988, when his intricate fake-punt call from his own 21-yard line allowed the Seminoles to beat the Tigers 24-21. It was one of only two losses for a top-10 Clemson team that season.

There were also some whoopings that his teams put on Clemson. The 1993 Tiger team won nine games and finished the season ranked in the top 25, but Florida State, the eventual national champion, defeated the Tigers in Tallahassee 57-0. In a battle of top-10 teams in 2000, Bowden’s team won 54-7.

However, when you look at the culture of the Clemson program today, a culture that has led to six consecutive College Football Playoff appearances, six consecutive AP top-four finishes and six consecutive ACC championships, many of the principles of that culture can be traced to Bowden.

In many ways, Bowden and Gene Stallings, Dabo Swinney’s head coach as a player at Alabama, are the grandfathers of Clemson’s current culture.

Swinney never played for or coached under Bowden, but he got his start at Clemson in 2003 as wide receivers coach under Bobby’s son, Tommy Bowden. Tommy followed his father’s footsteps in just about every aspect of a football program. Why wouldn’t you follow the teachings of the second-winningest coach in Division I history?

One of the biggest aspects of the Swinney football culture is family. I have seen it first hand in many ways, and one of the biggest examples is the Wednesday night family dinner when coaching and administrative staff members enjoy dinner with the team. You see players interacting with coaches’ wives and children, fostering lasting family bonds.

Where did that come from? It started when Tommy coached at Clemson, and he, of course, got the idea from his father, who had Wednesday night family dinners for years at Florida State.

Swinney also encourages coaches to have their children come to practice. I can’t tell you how many competitive touch-football games have been played on vacant Clemson practice fields over the years.

Years ago, Jeff Scott told me of similar games he played when his father, Brad, was coaching at Florida State under Bobby Bowden. When Jeff was a kid, he would sit in many of the Florida State offensive meetings that took place after school.

The importance of caring for your players off the field, during their careers and long after they have graduated is another tenet of the Swinney culture. That caring culture includes the importance of education, community service, employment after a player’s football career is over and spiritual advice for those who seek it.

You will notice that few assistant coaches have left the Tiger staff in the last 10 years. The same can be said of Bowden’s career at Florida State. He saw the importance of having a good coaching staff and treating those coaches fairly and professionally. Swinney certainly has seen that importance through working for Tommy Bowden.

When Tony Elliott’s son was playing in a national youth baseball tournament in Mississippi the day before the start of fall practice this year, Elliott was there to cheer his eight-year-old son on. He went not only with Swinney’s permission, but his encouragement to go.

You can also make the claim that Swinney has adopted some of the basics of the Bowden approach to offense and defensive strategy. Swinney might not be quite the gambler that Bowden was, but there are similarities in their approach from a pass-run play distribution, as are some of the defensive strategies.

All those tenets have led to similarities in wins and losses. Bowden’s famous streak of 14 consecutive AP top-five finishes (1987-00) is a national record. But Swinney’s run of six straight (2015-20) is third best.

The day he died, I saw many Tiger fans post positive Tweets about Bowden and what he accomplished. I hope they also understand the positive impact he had on their beloved program. 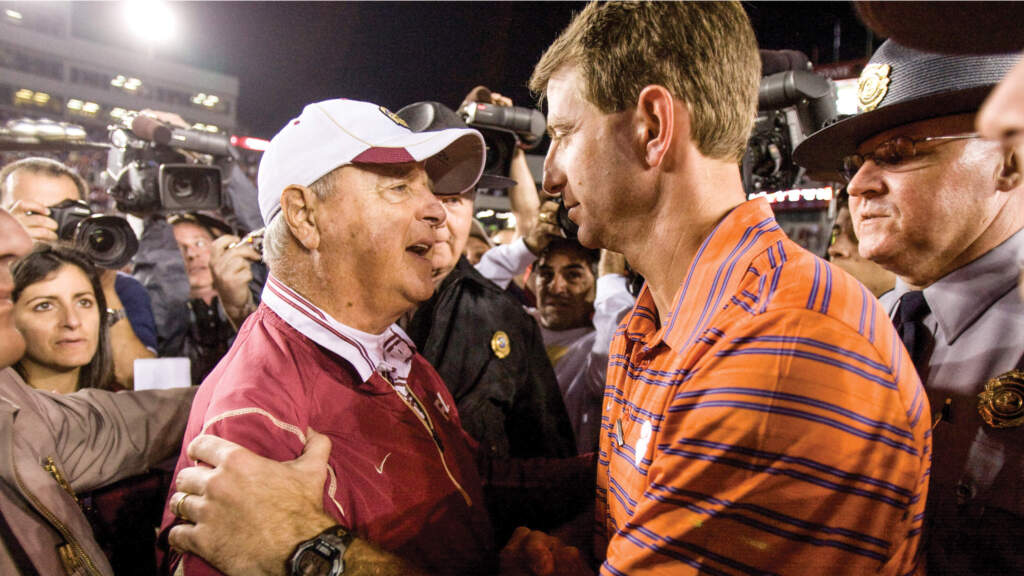