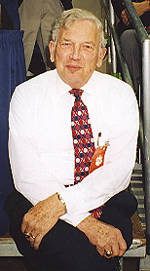 Clemson Sports Information Director Emeritas Bob Bradley will attend his 500th consecutive Tiger football game this Saturday when Clemson meets Duke at Wallace Wade Stadium. Bradley’s streak started on October 20, 1955 when he was in just his third week as Clemson SID. He would hold that position for 35 years, and has served Clemson in an emeritas capacity since 1989.

Bradley’s first game as SID was an October 1, 1955 contest against Georgia in Death Valley. The Tigers then traveled to Rice the next week, but Bradley did not make the trip, as his predessor, Brent Breedin attended the game. Breedin was leaving Clemson for Houston, so he made the trip.