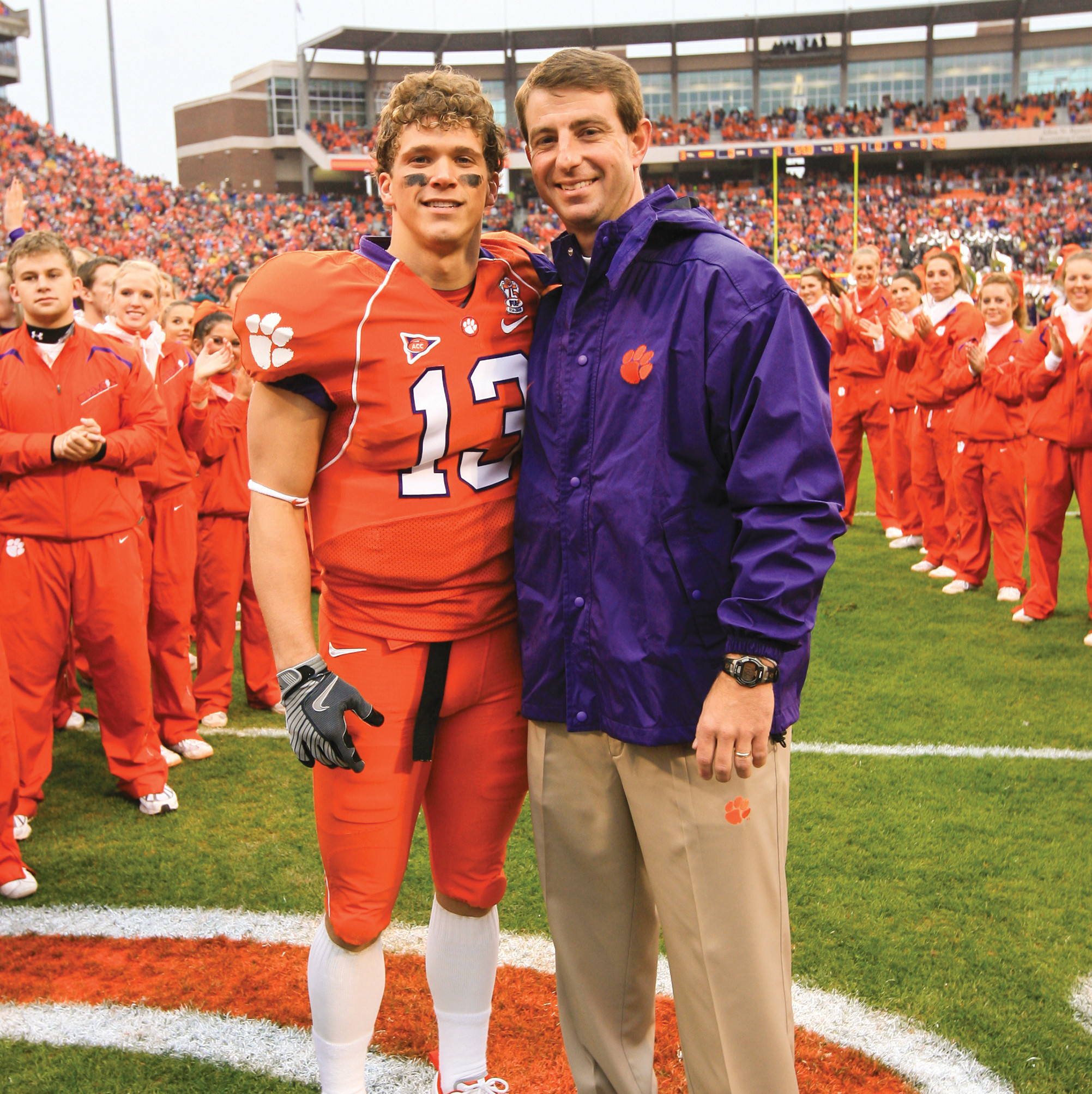 A planeload carrying the 180 members of Clemson’s travel party landed at Hanscom Air Force Base in Bedford, Mass., shortly after 2 p.m. Friday. Several of the passengers were at Clemson’s first game at Boston College as ACC foes in 2006, while even more were on hand in 2008 when Dabo Swinney earned his first win as the Tigers’ coach.

Two such passengers are current graduate assistants Tyler Grisham and Michael Hamlin, who both returned to their alma mater after pro careers. Grisham snagged his first career touchdown in the ’06 meeting, while Hamlin made what was thought to be a game-turning interception against BC quarterback Matt Ryan, only to see the call on the field overturned. The Eagles would go on to win 34-33 in a double overtime heartbreaker for the Tigers.

Two years later, the Tigers exacted revenge and earned Swinney his first win as interim head coach in the process. Trailing 21-17 midway through the fourth quarter, C.J. Spiller broke a long kickoff return to set up a Cullen Harper to Aaron Kelly touchdown pass that put the Tigers ahead by three. Clemson forced a BC turnover on the next possession, and added a field goal in the final minutes to preserve a 27-21 win in Alumni Stadium.

“Scoring your first career touchdown is certainly a moment you never forget,” he said. “But in ’08, getting Coach Swinney’s first win was special. I remember giving him the game ball in the locker room and saying, ‘First of many.'”

It was the first of 55 career wins, in fact, as Swinney brings his 4-2 Clemson team into Alumni Stadium for a 3:30 p.m. kickoff today against the 4-2 Eagles. Swinney was asked about the meaning of the ’08 win on Wednesday’s ACC teleconference and as you can imagine, it ranks high in the pecking order of his career win total.

“It’ll always be special for me,” he said of the ’08 win at Boston College. “It’s ironic we’re playing them this week because this is the week I was named interim coach six years ago. I remember having a big lead at half, but BC fought back. Spiller brought a kick back and Aaron Kelly had a big-time catch. We had to get a fourth-down stop on defense in what was a hard-fought, excellent football game.”

The Tigers came up short in the 2010 meeting, but got it done in 2012 behind three Tajh Boyd touchdown passes and 197 receiving yards by current Houston Texans wideout Nuk Hopkins.

In what has been a back-and-forth series since the Eagles joined the ACC (the Tigers hold a 5-4 edge since 2006), Swinney certainly hopes to see his Tigers show the same fight his ’08 team did.