Will Swinney is, as the old adage goes, a chip off the old block. A spitting image of his father, Clemson Football Head Coach Dabo Swinney, the senior wide receiver for the Tigers is named after his dad, whose given name is William, and like him in so many ways. Sure, Will talks like Dabo, smiles like Dabo and has the same naturally cheery disposition as Dabo, but what really ties the two together is their shared outlook on life. “Blessed and grateful” is how Will described it when sharing his thoughts and feelings surrounding his Clemson playing career, and not taking anything for granted and appreciating each opportunity that comes his way have the 22-year-old positioned to follow in his father’s footsteps.

“I’ve been blessed to have so many great teammates and coaches who have guided me on this journey,” said No. 22. “It’s such a fun thing to be a part of, and Clemson is the most special place there is.”

Having lived in Clemson since 2003, when he was just a boy and his father was named the wide receivers coach for the Tigers, Swinney has a special appreciation for what the Clemson program has become, as he had a front-row seat while witnessing Coach Swinney build his team into a powerhouse. Swinney considers the storybook process fit for a movie script, and knowing all about the hard work and dedication his father has put into metaphorically directing and producing the Clemson football “blockbuster” is the driving force behind his appreciative attitude.

“I have so much appreciation for all that it’s taken to get here. It speaks volumes on the leadership my dad’s brought to the program, the culture that’s in place and all of the great people he’s surrounded himself with.”

Never sloughing off a Clemson victory and always making sure to celebrate it, no matter how big or small, Swinney has certainly experienced his fair share of winning since joining the program as a walk-on in 2017. Swinney’s prep career saw him serve as a valuable wide receiver at nearby Daniel High School. Although he has continued to suit up as a wideout for the Tigers, Swinney has made a name for himself at Clemson as one of college football’s most reliable holders.

Consistently getting the job done in handling snaps and positioning the football just right on extra points and field goals, Swinney remembers his debut as the Clemson holder, the 2017 season opener against Kent State, like it was only yesterday. Perhaps an even greater milestone for Swinney occurred the following year, when he scored his first career touchdown on an eight-yard shovel pass versus Louisville. All of those memories and more, including winning the national title to cap off a perfect 15-0 showing in the 2018 season, constitute an incredible Clemson tenure for Swinney, who has cherished every moment of it.

“My Clemson experience has been everything I thought it’d be and even more,” said Swinney. “It’s been awesome in every area of my life, from the academic and social sides to how I’ve been able to grow as a leader and, obviously, the football side and the success we’ve had on the field.” 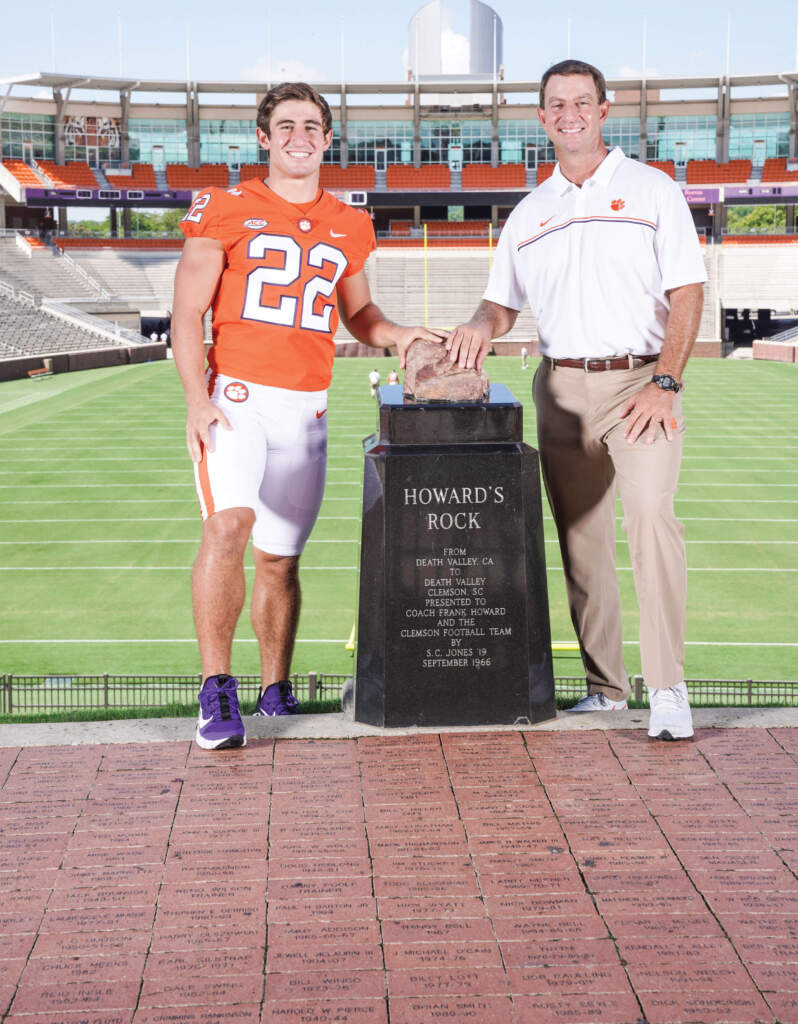 Will has had the pleasure of playing alongside his brother Drew, a redshirt sophomore for the Tigers, and both young men take pride in carrying on their father’s legacy by serving as wide receivers. While Will was coached by his dad in baseball, basketball and football throughout his childhood, there is something extra special about receiving Dabo’s tutelage as a collegiate student-athlete. Having playfully dubbed his insightful, loquacious father “the king of quotes,” Will always takes his sage advice to heart and has thoroughly enjoyed playing for Coach Swinney, or, as Will refers to him, Dad.

“Playing under him has been the best of both worlds for me. I feel like I’m just one of the guys, but it’s always nice to have my dad around to watch me put in work. I know he’s proud to see how Drew and I have developed.”

Now a scholarship player, Swinney has paid his dues as a Tiger and not just as a holder. Tallying receptions, carries and punt returns, the well-rounded playmaker has been a valuable piece of the Clemson football puzzle in recent seasons. Football aside, the marketing major is an excellent student and a devoted leader. He is a three-time ACC Academic Honor Roll member and an ambassador for Clemson football’s P.A.W. Journey leadership initiative, a program that enabled Swinney and some of his teammates to visit New York City and meet with various business leaders in 2019. Furthermore, Swinney was named a semifinalist for the prestigious William V. Campbell Trophy, which is awarded annually to the college football player who best exemplifies a combination of success on the field and in the classroom and community.

“It was very humbling and cool to take a step back and think about how far I’ve come,” Swinney said of his nomination for the “Academic Heisman Trophy” and what it meant to him. “To get noticed and honored in that way makes me want to work even harder and continue to strive for excellence.”

Will’s favorite attribute of his father’s coaching style is how Dabo consistently pushes his players to think for themselves and be introspective in everything they do. In Coach Swinney’s program, brainpower is equally as important as willpower, and Will has thoughtfully willed himself to a promising future lying in wait.

Swinney, who may choose to take advantage of the 2020 redshirt rule and return to the Tigers next year, is keeping his options wide open and considering pursuing a career in either coaching or the business world. For now, though, he is focused on never losing sight of how blessed he is to be able to represent Clemson on the gridiron and how grateful he is for having the opportunity to live up to the Swinney name and make his family proud.

Earlier this year, Will Swinney spoke to the media about his gratitude for all that Clemson University and the Clemson football program have made possible for him, stating the following.

“I want to take this opportunity to express how blessed and grateful I am to play at a school like Clemson University and be a part of this. I speak for a lot of the guys in our locker room when I say that I’m so thankful for Clemson fans and the donors who support us through IPTAY. They’re amazing. And yes, it’s hard work being a student-athlete, and it’s important for fans to realize that. There are millions of different pressures that come with it, but I also think it’s important for me to let fans know that, as a student-athlete, I’m so appreciative of having the opportunity to play football at Clemson University.

“I’ve been here as a walk-on and a scholarship player, so I’ve experienced both sides of it. Even as a walk-on, you still get access to all of the academic services, the weight room and the food. The meals we receive are unbelievable, and I know none of that is possible without the people who have donated to this program and supported us, the student-athletes. The opportunity to live out my dream and play here at Clemson isn’t something I take for granted, and I greatly appreciate all of the people who have made it possible.

“As a team, we want to play in a way that gives people hope, especially during this unprecedented time. We didn’t even know if we were going to have a season this year, so now that we have this opportunity, we want to come together and make this a special one. Having the opportunity to play on this team and to know I’m doing something that can bring so much hope and joy to others is such a blessing.”