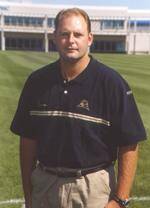 Head Coach Tommy Bowden has announced that David Blackwell, most recently the linebackers coach at the University of Pittsburgh, has joined his staff at Clemson. Blackwell, a native of Greenville and a graduate of Berea High School, fills the opening on Bowden’s staff that was created when Rodney Allison left Clemson in December to become the head coach at UT Chattanooga.

Blackwell, 31, had been with the Pittsburgh program each of the last three years under Head Coach Walt Harris. He was a big part of the Panthers resurgence on the gridiron the last three years. Pittsburgh went to a bowl game each year, including 2002 when the Panthers defeated Oregon State in the Insight Bowl, 38-13. That victory gave Pittsburgh a 9-4 record and a #18 final ranking in the ESPN/ USA Today Coach’s poll, a #19 ranking by Associated Press. The Pittsburgh defense had a lot to do with the Panthers success, as the point prevention unit ranked 14th in the nation in scoring defense, 12th in total defense, 15th in pass efficiency defense and 24th in rushing defense.

“We are very excited to have David join our staff,” said Bowden. “Pittsburgh has made a strong improvement over the last three years and David has had a lot to do with that. He is an outstanding coach on the field, and is also a terrific recruiter. As I made my background checks on him, his abilities as a recruiter were a consistent theme. Prior to his career at Pittsburgh he was the recruiting coordinator at Illinois State for four years. He obviously knows this area of the country.

“We have not determined which position he will coach, but we know he will be a part of our defensive staff.”

The performance of the Pittsburgh linebackers certainly had a lot to do with the team’s success in recent years. Gerald Hayes was an All-American and three-time all-conference selection under Blackwell. He had at least 100 tackles each of the last three seasons. Six of his players during previous coaching positions have signed NFL contracts. More should join the league this year.

Over his four years in Normal, IL, Blackwell coached three All-Americans and 11 all-conference players. In 1996 his defensive line accounted for 38 of the team’s 47 sacks, the second highest total in school history. The 1999 team finished number-two in the nation at the Division I-AA level with a school best 11-3 record. The team also won the school’s first ever conference championship. In 1999, Galen Scott, one of Blackwell’s linebackers, had 173 tackles, including 27 in one game, both school records. Scott was named an All-American that season.

Blackwell began his college football experience at East Carolina. He came to the Greenville, NC based school in 1990 as a freshman offensive lineman. That season he graded 85 percent in a game against Florida State. In 1991, a year in which East Carolina posted an 11-1 record and a #9 ranking in the final AP poll, Blackwell suffered a career ending neck injury.

The following season, Blackwell served as an undergraduate assistant coach with the Pirates. In 1993-94-95 he coached the rush end linebackers. He helped East Carolina to two Liberty Bowl berths during that time.

Blackwell is a 1997 graduate of East Carolina University with a Bachelor of Science degree. He is married to the former Melissa Androutsos.