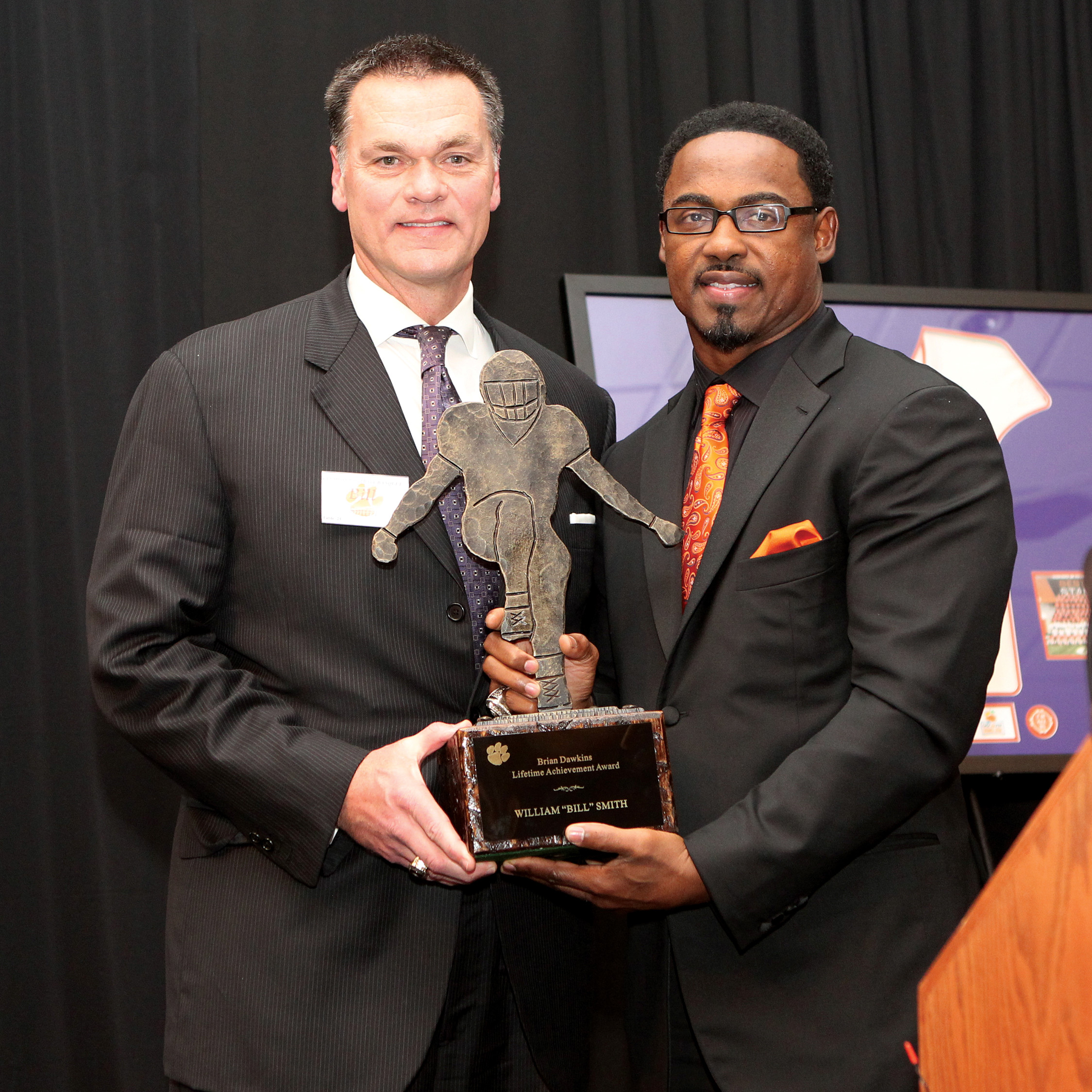 Bill Smith has had a lot of honors in his career, but this past weekend in Death Valley, he received one that has to be at the top of the list. He received the Brian Dawkins Lifetime Achievement Award from the Clemson football program. The award is named after its first recipient, former Tiger All-American Brian Dawkins, who played 16 years in the NFL.

Dawkins was more than just a nine-time Pro Bowl defensive back. The 1996 Clemson graduate was one of the most respected players in the NFL during his era and most certainly will become the Tigers’ first Pro Football Hall of Fame selection.

Head Coach Dabo Swinney instituted the award the year after Dawkins retired, and Dawkins was the first recipient. Now, Smith is the second selection, an honor he deeply appreciates.

“This is a very humbling experience,” said Smith. “When I received the phone call from Jeff Davis telling me that I was the recipient, I asked him if he had dialed the wrong number.

“I am very honored to win an award named after Brian Dawkins. Not only was he a great player for Clemson and in the NFL, he is a man of high character and one of the most respected former Tigers in any profession.”

The same can be said about Smith. In 1996 at the age of 36, Smith was elected to the Clemson University Board of Trustees, the youngest selection in the governing body’s history. He went on to become vice chair and a life member in 2010.

Smith has gone on to a successful business career as CEO of Red Rock Developments in Columbia and has more than 30 years of experience in commercial real estate development.

He is active in business and civic organizations as a member of the South Carolina Economic Developers Association and the Carolinas Partnership. He is also a past member of the board of directors of EdVenture Children’s Museum and the Columbia Urban League.

“Bill Smith is one of our most respected former players,” said Swinney. “He played at a championship level as a starter on the 1981 National Championship team and has now gone on to a successful business career.

“He has been very active in his community and has been so involved in Clemson University as a member of the board of trustees. He is a great role model for our current players. He is an example of what our players should strive to be after they graduate.”

Smith is the first to tell you that he was not a player of Dawkins’ level on the gridiron. But he was a solid player who was a reserve on Clemson’s 1978 team that finished ranked No. 6 in the nation and was a starter on the 1981 National Championship team. He was one of the team leaders on the greatest team in school history.

“That 1981 season was a great experience for Clemson athletically and for the entire university,” stated Smith. “That team in a lot of ways told Clemson people it can compete on a national level in every area. It gave us the mentality that we can be among the best.

“Jim Barker’s goal to be a top-20 national public university can be tied to that accomplishment. If Clemson wants to do something and we put our minds to do it, we can accomplishment whatever we want. Why not Clemson? We can be as good as anyone in any area.”

In September, Clemson reached that top-20 goal when U.S. News & World Report announced that Clemson was among the top-20 public universities in the country.

Winning that title in the Orange Bowl over Nebraska was certainly an athletic highlight of Smith’s career. He had many others. There was a blocked punt for a touchdown at Virginia and two sacks in a victory over South Carolina.

However, Smith played the game of his life in the 22-15 victory over Nebraska, as he registered a career-high 10 tackles, second on the Tiger defense behind the 14 tackles by All-American Jeff Davis.

“I guess Nebraska thought I was the weak link,” said Smith modestly. “They had some great running backs in Roger Craig and Mike Rozier. Coach (Danny) Ford said before the game that they liked to attack the defensive ends and the cornerbacks in their running game and that I would have the opportunity to make some plays.”

Winning that championship fostered a lot of strong relationships for Smith and that 1981 team. It has been a Clemson experience that enhances his life daily and will continue to do so until his final days.

“Clemson athletics prepared me for life in terms of discipline and time management,” explained Smith. “It taught me to compete and how to be a good teammate. We learned a lot of things on the football field that you can’t learn in the classroom, and it has helped me tremendously in the business world.

“But the most important part of my time at Clemson was establishing the relationships, not only with my teammates, but with all Clemson alumni. Wearing that Clemson ring is a source of pride.

“Clemson is a family and we take care of each other. It is a very special place and I was very fortunate to go to school at Clemson.”