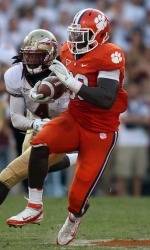 CLEMSON, SC – In the stat book it goes down as just a simple 12-yard completion. But, in the big picture of what Saturday’s 35-30 victory over No. 11 Florida State meant, Tajh Boyd’s third-down pass to tight end Dwayne Allen was the play of the game.

Following a Florida State touchdown that cut No. 21 Clemson’s lead to 28-23 on the first play of the fourth quarter, the Tigers found themselves faced with a third down-and-10 at their own 20-yard line. With momentum on their side, every one of the 82,000 people at Memorial Stadium knew the Seminoles’ fifth-ranked defense was gunning for Boyd.

But, the Clemson quarterback stood tall in the pocket and delivered a strike to Allen who was coming open near the left hash mark around the 30-yard line. With little room to squeeze the ball in, Allen snatched Boyd’s perfectly thrown pass before falling to the ground at the 32, securing a pivotal first down.

“That might be the play of the game,” Clemson Head Coach Dabo Swinney said.

Three plays later, it definitely proved to be as Boyd found a streaking Sammy Watkins, who burned FSU cornerback Mike Harris with a double move, down the near sideline. The true freshman, who caught seven more passes Saturday for 141 yards and two touchdowns, hauled in the Boyd aerial and raced untouched into the end zone to put Clemson ahead, 35-23, with 13:06 to play.

But as big as Watkins’ play was, it would have never had happened without Boyd’s pass to Allen first.

“That was a great catch by Dwayne,” Boyd said. “It was a hitch route by Dwayne and a flare route by DeAndre Hopkins. I saw Dwayne coming open so I just let it go. That was the biggest third-down conversion of the game right there. It was really the go-to.”

For Allen, who also caught a 12-yard touchdown pass from Boyd in the second quarter, it was just another opportunity for him to make a play when his team needed him the most.

“It was a huge play,” Allen said. “The momentum had shifted even before that when Tajh had the slip up with the interception. The momentum was all Florida State. We needed a score so we could get back ahead enough so that momentum can tip back our way.

“I was lucky enough that Coach (Chad) Morris made a great call. He saw the matchup and I was able to exploit it.”

Allen exploited those matchups all afternoon for the most part. The 6-foot-4, 255-pound tight end hauled in four catches overall for 67 yards as he helped Clemson rack up 455 yards of offense against a Seminoles’ defense that had been giving up just 195 yards per game coming in.

“It goes back to third down,” Swinney said. “We were nine-of-17. That’s better than 50 percent. That’s a key stat right there.”

And one of those third down conversions just happened to be the play of the game.

“Whenever Coach (Swinney) first took over the job, he used to call me `Big-Play D.A.’ But, he has not called me that in a while so I’m trying to work at that and get him to start calling me by my nickname, again,” Allen said.