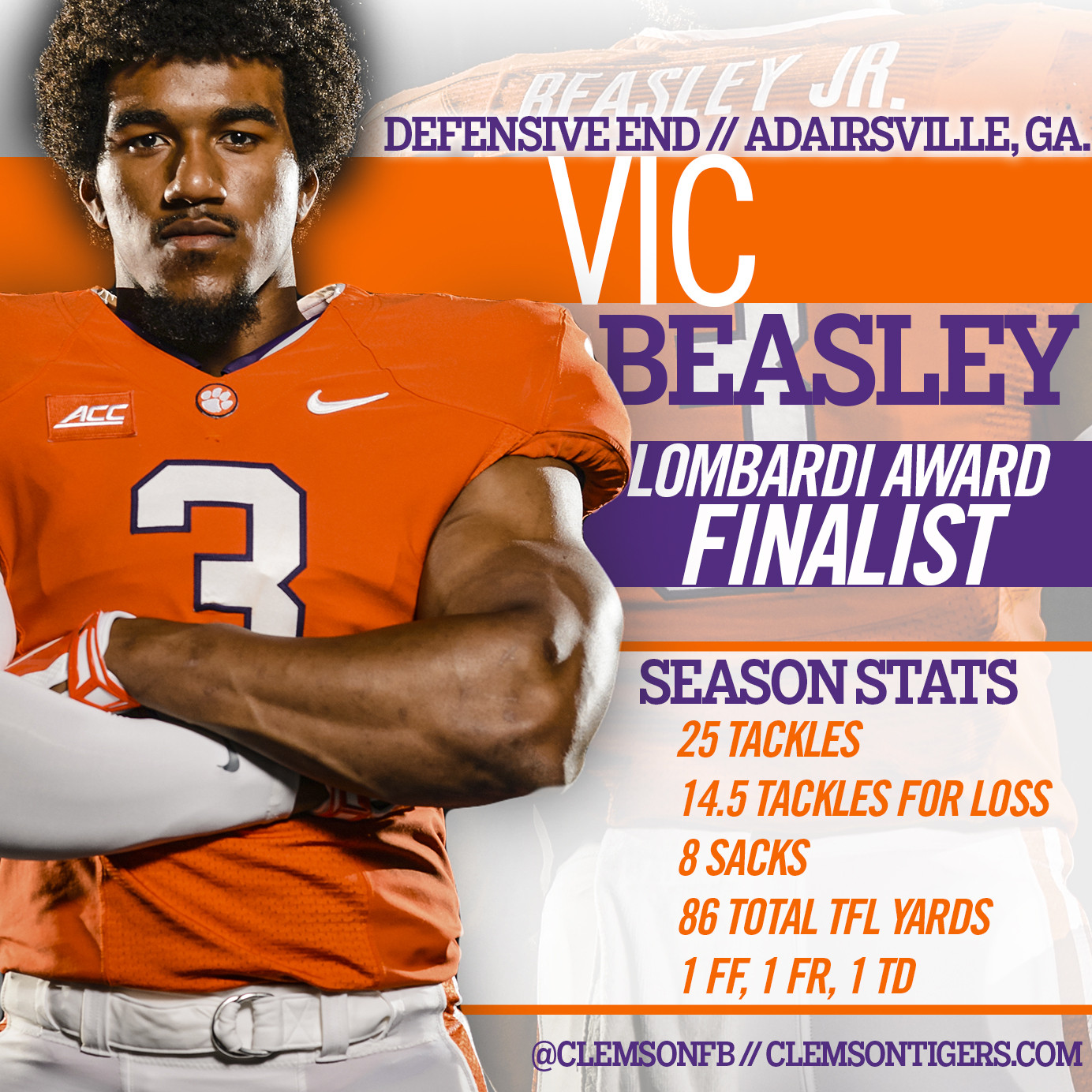 Clemson, S.C.—Clemson defensive end Vic Beasley is one of four finalists for the 2014 Lombardi Award. The Rotary Club of Houston made the announcement on Thursday. The award is presented each year to the nation’s top college football lineman and is given in honor of the former legendary Green Bay Packers Head Coach Vince Lombardi. The four finalists are Beasley, Joey Bosa of Ohio State, Hau’oli Kikaha of Washington and Scooby Wright III of Arizona.    Beasley leads the Clemson team in sacks with eight and in tackles for loss with 14.5. He ranks 13th in the nation in both categories.  The Clemson graduate from Adairsville, Ga is a major reason Clemson ranks second in the nation in total defense, fourth in rush defense and 10th in pass defense.  Clemson is 7-3 so far this year and is ranked #22 by the latest College Football Playoff Poll. For his career, Beasley is Clemson’s all-time leader in sacks with 29.  He is first among all active FBS players in sacks (29), sack yardage (221), tackles for loss (45.5) and tackles for loss yardage (274).  He has 60 more yards on sacks and 68 more yards on tackles for loss than any other active FBS player. Beasley is the third Clemson player to be a finalist for the Lombardi Award. The others were William Perry in 1984 and Da’Quan Bowers in 2010.   Neither won the award. For over 40 years, the award has been presented annually to the nation’s best Division I college football lineman (offense or defense) who, in addition to outstanding performance and ability, best exemplifies the discipline of Vince Lombardi.  Head coaches of NCAA FBS teams, all former winners and finalists for the Lombardi Award, and selected members of the national sports media make up the electorate that decides the award winner.The 2014 honoree will be announced at the Rotary Lombardi Award Presentation on December 10 at the BayouMusicCenter in downtown Houston, Texas. This year’s Rotary Lombardi Award ceremony will be broadcast by Fox Sports Southwest.