Derion Kendrick has taken a winding road to become the All-ACC cornerback he is today. A high school quarterback, Kendrick was recruited as an athlete and originally competed for time at the wide receiver position.

One day when he walked into the locker room to see a white jersey in his cubby, he knew he was switching to the defensive side of the ball.

In his first season as a defensive back, Kendrick was named Second-Team All-ACC and recorded nine tackles in the national championship game in January. One year later, he is eyeing the Jim Thorpe Award for the nation’s top defensive back as a personal goal.

He credited his experience as a quarterback as part of the reason he was able to transition to defense so easily. He believed he had a good understanding of what defenders can do to make life difficult for offenses. This knowledge immediately gave him the confidence to make the position change.

“I already knew I could play both sides of the ball, and it was just a matter of time. When I made the transition, I needed to work on a lot of technique things and the ins and outs. Being able to take it all in and getting better every day was always the goal.”

A season and a few games into his new role, the Rock Hill, S.C. native believes he is finally in the best position for his skillset, mentioning that his old coaches often told him he is well suited athletically to play defensive back.

While changing his mindset from offense to defense posed a considerable challenge, it pales in comparison to the life-changing experiences he has already faced and continues to overcome.

As a senior in high school, Kendrick was witness to his close friend, Quan Torbit, being shot three times and passing away. Just over 12 months later, moments before eating dinner with the rest of the Tigers before their game at Texas A&M, he received a phone call with the news that his best friend, De’Mon Davis, had also been shot and did not survive.

The presence of his teammates in this moment provided some level of comfort for the grieving Kendrick.

“The only people who knew was the receiver group, since that’s where I was at the time. Them being there so I had shoulders to lean on was really helpful for me.”

Such a loss is incredibly hard to deal with for anyone, but as a senior in high school and freshman in college, respectively, Kendrick handled the tragedies with immense strength. Of course, grief of that level is not a short or simple process, and he continues to live and play in memory of the two men lost. 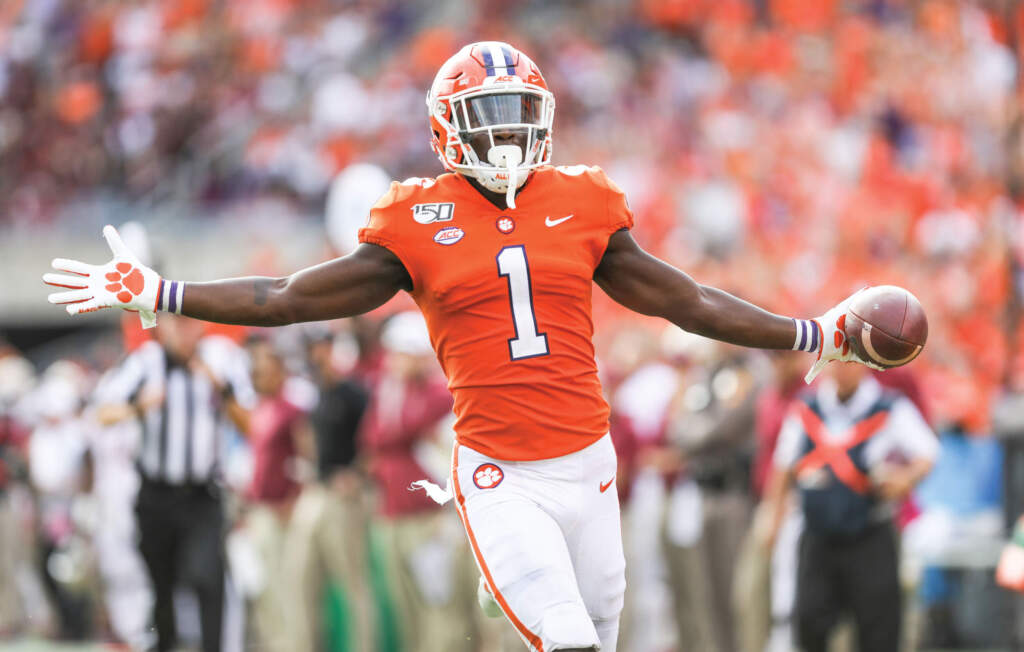 Unfortunately, Kendrick already had experience dealing with grief. He lost his aunt, to whom he was very close, at the age of eight. From her, he learned the importance of keeping a positive attitude and staying faithful.

“No matter what’s going on in your life, keep your head up and keep pushing, because the best is yet to come.”

Through that lesson, Kendrick has been able to overcome his great losses and live on in the way he believes best honors his friends…happily.

The names of his friends can often be found written on his equipment on Saturdays when he dedicates every snap to their memory. This is one of the many ways Kendrick continues to honor Torbit and Davis.

“Keeping a smile on my face is the main part, because that’s what they always did, and they would want me to as well. I think about all the times they were there for me when I needed them, and they push me to do everything I can for them.”

Luckily, Kendrick has a strong support system within his family, which he considers to be the biggest factor to staying strong in moments of difficulty. When asked what defines him, he had one clear message.

“Treat people like family. Love everyone around you, not just the group you hang around, but everyone, because everyone is going through something, and remember to laugh a lot.”

It is the notion of family that lured Kendrick to Tigertown to begin with. He cited Dabo Swinney’s character and the culture of family and honesty that he has created as what pushed him over the edge and into Clemson.

The ability to love all he comes in contact with and understand the strife people are likely working through is one that has been earned through a lifetime of grief experienced in just 20 years.

Rather than let these tragedies bog him down, Kendrick has worked through his challenges to become a caring and thoughtful person as well as a teammate, not to mention also transitioning from a quarterback to an All-ACC cornerback in just three seasons.

As his season continues, Kendrick is looking towards the future of Clemson football as well as the future of his teammates. He is working to become the best leader possible and pave the way for the younger members of the team to reach their full potential.

With his mindset that keeps him smiling and loving all of those he comes into contact with, it is certain that the men Kendrick is looking to help grow are in great hands.