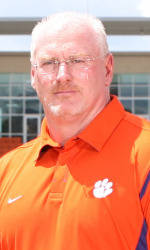 Coach Batson has served as a head strength and conditioning coach at the collegiate level for over 20 years. The last 13, Joey has served as the Director of Strength Training at Clemson University. In May 2009 he was named Master Strength and Conditioning Coach by the CSCCa. A fellow S&C coach told FootballScoop that coach Batson is, “a complete professional and has the respect of every coach and player on the team.”

Head coach Dabo Swinney spoke with FootballScoop recently about Coach Batson. “Coach Batson puts his heart and soul into improving our players. He set the standard of discipline and instills a unique toughness into these guys.”

FootballScoop noted after the first day of August practice this season, new Defensive Coordinator Kevin Steele commented, “The number 1 thing that stood out at me today was Joey Batson. I’ve been at practices at other schools where seven or eight guys are on I.V.’s after the first practice. Not one of those today. The job he (Batson) did this summer can’t be stated enough.”

Batson told FootballScoop he works hard to “instill strong work ethic in his players. We motivate them, stoke their passion for the game and try to keep them hungry for improvement.” He added that his staff, led by Larry Greenlee and David Abernethy, are tireless workers and do a great job with the team.

Swinney went on to share this story, “In late October we went down to play Miami. It was an afternoon game, hot and humid. At the time they (Miami) were ranked #8 in the country. We went to overtime and our defense held them out of the end zone and then we scored to win it. After the game, I gave the game ball to coach Batson and his staff. Our conditioning level was very evident that day. Joey and his staff were a big part of us winning in Miami.”

Not only does coach Batson’s program get the kids strong, it puts them in a position to remain healthy. During the season, Clemson did not suffer one serious injury until the ACC championship when one player broke an ankle.

Coach Batson was nominated by his peers and was selected by a panel of coaches, former coaches, and previous winner. Other finalists for the award were Chris Doyle (Iowa), Corey Edmond (Arizona) and Jay Butler (Rutgers). Scott Roussel, President of FootballScoop, added, “We spoke with football coaches and strength coaches around the country about this group of finalists. Each of these guys is very well thought of by their peers and any program in the country would be lucky to have them.”

Batson will receive his award at the AFCA Convention in January and will receive a complimentary supply of various Muscle Milk® and CytoSport products.