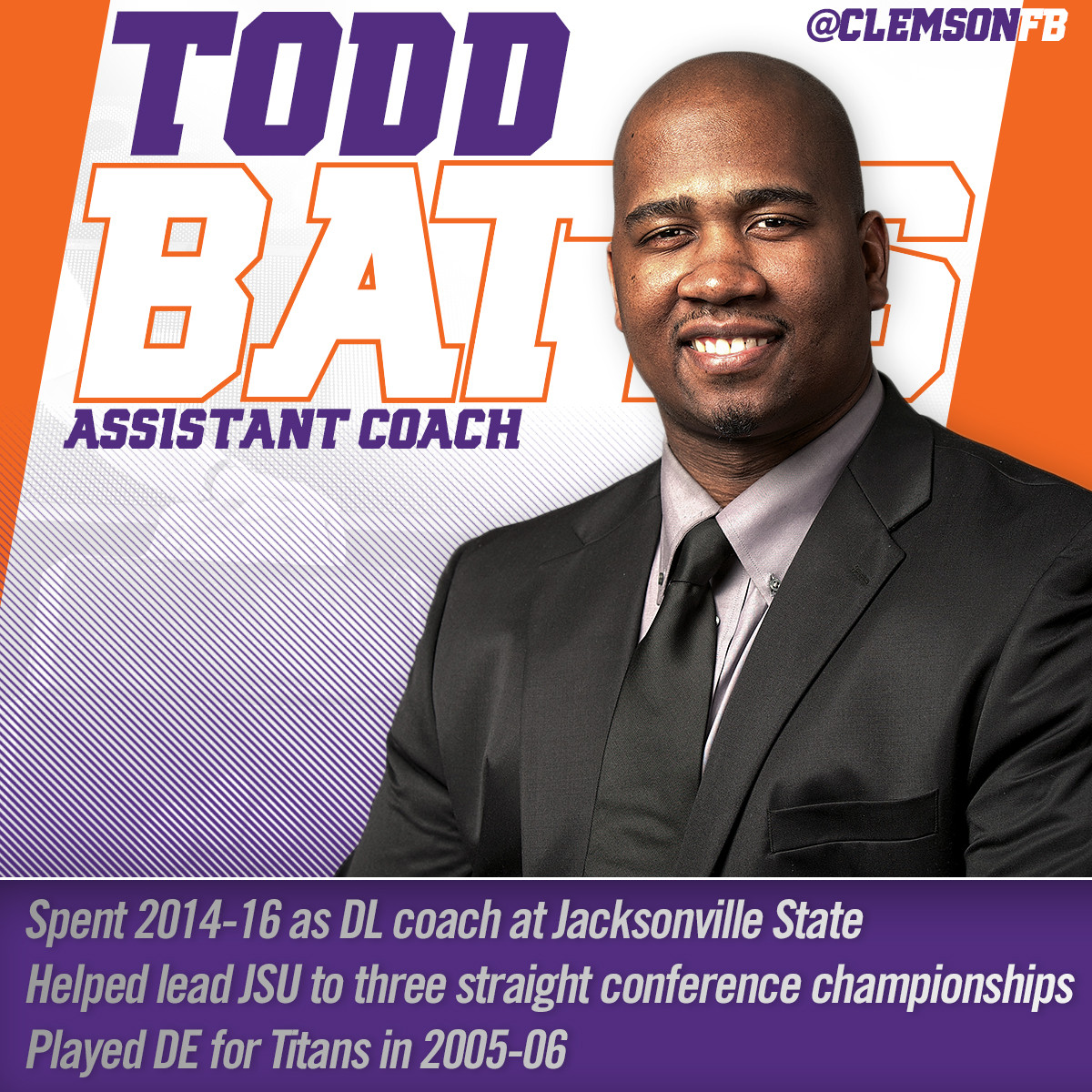 Conn, a teammate with Swinney on Alabama’s 1992 National Championship team, was on Clemson’s staff this past season as senior defensive analyst and is set to coach the safeties and work closely with Mike Reed, who will coach the cornerbacks.

Bates will coach defensive line and comes to Clemson after three years coaching the same unit at Jacksonville State, a top 10 program in recent years at the FCS level.

“These are two outstanding men who are very good fits with our staff,” said Swinney.  “Of course Mickey was on our staff last year and already has a strong knowledge of what we do.  Todd is the same age I was (33) when I came to Clemson.  He has worked our camp in recent years.  I remember one of the camp days Coach (Dan) Brooks came to me and said, ‘Todd Bates is the best coach we have out here.’   I have been following his career closely.”

Conn just finished his first season as senior defensive analyst with the Clemson program and helped the Tigers to a 14-1 record and the National Championship.  The Tigers won the ACC title as well and beat a school record five top 25 teams, including No. 2 Ohio State and No .1 Alabama in the College Football Playoff.

Conn helped a Clemson defense that finished the year eighth in the nation in total defense and 10th in scoring defense.  The Tigers were also third in tackles for loss, fourth in third-down conversion defense, and fourth in pass efficiency defense.

Conn came to Clemson from Grayson High School in Georgia where he started the program in 2000 and coached for 16 years.  He had a record of 137-48 and took the program to seven region championships.  He won at least 10 games in eight of his last nine seasons, including a 13-1 record in 2015.

Conn led the Rams to the State Championship in 2011 when one of his running backs was Wayne Gallman, who just finished his career fifth in rushing in Clemson history.  Tigers Ryan Carter and Nick Schuessler were also developed under Conn at Grayson.

A 2005 Alabama graduate, Bates just finished his third season at Jacksonville State as defensive line coach.  In his three seasons the Gamecocks were 33-6 overall, 23-0 in the Ohio Valley with three conference championships.  It marked the first time an Ohio Valley team had three perfect conference seasons in succession.

Jacksonville State finished the 2016 season with a 10-2 record and a No. 6 final ranking in the FCS Coaches Poll.  They advanced to the FCS Playoffs where they lost to finalist Youngstown State.  Their only regular season loss was at LSU.

Bates was part of a defensive staff that helped Jacksonville State to a No. 4 national ranking at the FCS level in total defense, allowing 275 yards per game.  The Gamecocks were also second in pass efficiency defense, fifth in rush defense, seventh in sacks, seventh in total interceptions, seventh in scoring defense and eighth in tackles for loss.

The 2015 Jacksonville State campaign featured a 13-2 record including a 12-game win streak that was one shy of the school record. The Gamecocks’ lone losses were to No. 6 Auburn in overtime, and to North Dakota State in the FCS title game.

The JSU defense made great strides in 2014, finishing second in the OVC in total defense and pass defense, while leading the league in rushing defense at just 127.7 yards per game. That stingy defense helped JSU post a 10-2 record, including a perfect 8-0 OVC record and the school’s fourth OVC title.

Bates played at the University of Alabama from 2001-2004. He was the only true freshman to play for the Tide in 2001. Over his career he was selected SEC Defensive Player of the Week twice, and named permanent team captain for the 2004 season.

After college, Bates played for the Tennessee Titans as a defensive end from 2005 through the 2006 season.

Bates began his coaching career at Talladega High School in 2007. The following year, he coached at Oxford High School where he was an assistant football coach as well as the head strength and conditioning coach. He spent the next two years at Idaho State coaching the defensive line, then went to East Mississippi Junior College before going to Jacksonville State for the 2014 season.