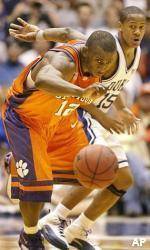 Olu Babalola, a four-year lettermen who played 108 games for the Clemson men’s basketball game over the last four years, worked with the Clemson football team today during spring practice.

Babalola, a native of London, England, wore number 57 as he worked with the Clemson defensive ends. He wore a helmet, shoulder pads and shorts while the rest of the team wore complete uniform. He took part in the drills during the early stages of practice, but obviously did not do any of the hitting drills.

This is the first time Babalola has donned a football uniform since his junior year of high school when went through preseason practice for St. Augustine Prep in Richland, NJ. He has never played in an organized football game.

“The hardest thing I had to do today was learn how to pronounce his name,” said Clemson Head Coach Tommy Bowden who introduced Babalola to the team prior to practice. “I talked with Oliver Purnell about Olu last week. When I watched out basketball team play I was always impressed with the effort and intensity Olu showed. He certainly has athletic ability and we look forward to seeing what he can do during these spring practices. He is starting out as a defensive end, but we could change him to a tight end later.”

Babalola started 65 games for the Tigers over the last three years and concluded his career on the basketball court with 694 points and 363 rebounds in 108 games. He shot 70 percent from the foul line and averaged 6.4 points and 3.4 rebounds per game. This past season he was the fourth leading scorer for Oliver Purnell’s Tiger team that advanced to the NIT. He scored 6.8 points per contest and averaged 3.7 rebounds per game.

He had his best game of the year at Virginia when he led Clemson in scoring (22), rebounding (7) assists (5) and steals (2), the first Clemson forward in 34 years to lead the Tigers in all four categories in the same game. He had a memorable senior night when he scored a three-point goal with 9.8 seconds left to tie the game against Virginia Tech. Classmate Sharrod Ford then won the game with a dunk at the buzzer.

Babalola is attempting to become the first scholarship basketball player to also play on the Clemson football team in 20 years. Mike Eppley played both sports at Clemson as a quarterback and point guard for four years (1980-81 through 1983-84). Current Clemson wide receiver Chansi Stuckey practiced with the Clemson basketball team three years ago, but came to Clemson on a football scholarship. He never appeared in a Clemson basketball game.

Stan Rome played both sports at Clemson during the 1975-76 academic year. He came to Clemson as a basketball player starting with the 1974-75 academic year. He had 15 catches for 306 yards and two touchdowns in 1975 as a wide receiver. He later played professional football with the Kansas City Chiefs.

In addition to Eppley and Rome, the only other Clemson athletes in the ACC era (since 1953-54) to play in at least one football game and one basketball game over his career are Gary Cooper, who lettered in football from 1986-89 and played one game during the 1987-88 basketball season, and Patrick Sapp, a Clemson football scholarship athlete from 1992-95 who played four games for Rick Barnes Tigers during the 1994-95 season.

Of course all-time Clemson legend Banks McFadden played with distinction in both sports from 1937-40. He led the Clemson basketball team to its only postseason tournament championship in March of 1939, then led the Clemson football team to a Cotton Bowl victory over Boston College in January of 1940. He was named the nation’s most versatile athlete in 1939 and is the only athlete in Clemson history to be named All-American in both