Ever since Austin Spence was a young kid, he has loved contact sports. Growing up in Florence, S.C., Spence spent his childhood at the ice rink dreaming of one day strapping up his hockey pads for the Carolina Hurricanes. When Florence “lost ice” and the hockey arena was turned into a civic center, Spence was then in search of a new contact sport.

“I was looking for that physical sport since I couldn’t play hockey anymore. “That’s when my brother said I should try football out.”

During his sophomore year of high school, Spence began helping his brother, Alex, who was a kicker on his school’s football team, by snapping him the ball, and thus, Spence’s love for long snapping began.

Spence began to attend Rubio Long Snapping Camps, and he eventually followed in his older brother’s footsteps and committed to play for the Tigers.

“I loved it here on all my visits,” said Spence reflecting on his time attending summer camps while still in high school. “I loved the culture and the coaches. I knew this was where I had to be.”

Fast forward to April 2018. Spence was coming off his first full year of starting as the punt-team long snapper and appeared in all 14 games of the 2017 season. During spring workouts, Spence noticed something was off.

“I noticed I was getting really light-headed during workouts.”

The rising redshirt junior headed home, where a physician revealed to him and his family that he noticed a heart murmur and advised him to see a cardiac professional.

After consulting with a cardiologist in his hometown of Florence, Spence was diagnosed with aortic insufficiency, or a leak in aortic valve. The doctors explained to Spence that the leak was not to the point where he was forced to give up the sport, but the doctors said he should begin a reduced workout regimen to further prevent more damage to the heart.

Spence snapped in all 15 of the games in 2018 during the undefeated national championship season and registered as a senior and ran down the Hill on Senior Day.

After arriving back from the National Championship Game, Spence was advised by his cardiologist that it was time to hang the cleats up.

On road games during the 2019 season, Spence has dawned a new uniform, khaki pants and a coaches pull-over. During games at Memorial Stadium, Spence proudly sported his #52 jersey on the sidelines.

The former long snapper has taken this year to help out around the program and look at football past his life on the gridiron.

“This year has taught me about life after football and has given me a good perspective on my life to come. Football has taught me a lot about hard work and perseverance, and this year, I got to see how I can translate those skills into the real world.

When asked what his favorite memory was at Clemson, he answered with a laugh and said, “There might be too many memories to just pick one.”

“I remember the Louisville game, two top-five teams, ESPN College GameDay was here, and that to this day is still the loudest I’ve ever heard Death Valley.”

After the question was changed to his top-three memories, he said, “Of course, the national championships and everything that came with those.”

“If I had to choose one top memory, it would be bowl week heading into the matchup against Ohio State in the Fiesta Bowl in Phoenix. That whole week, there was a calmness over the entire team. We all believed we were going to beat Ohio State and get back to the national championship. Being out there with all your best friends and then accomplishing the goal you set out for…it was a really fun week.”

Spence, an economics graduate, hopes to pursue a job in the field of hospital administration after his time at Clemson is complete.

“It has been so much fun. The past five years have been so wonderful.

“I also want to say thank you to our fans for making every home game sold out and making it a crazy environment. The Clemson Family is a real thing.”

Spence will leave Clemson playing 31 games, winning two national titles, winning four ACC championships and gaining a new family on the football team. For Spence, it was worth every minute. 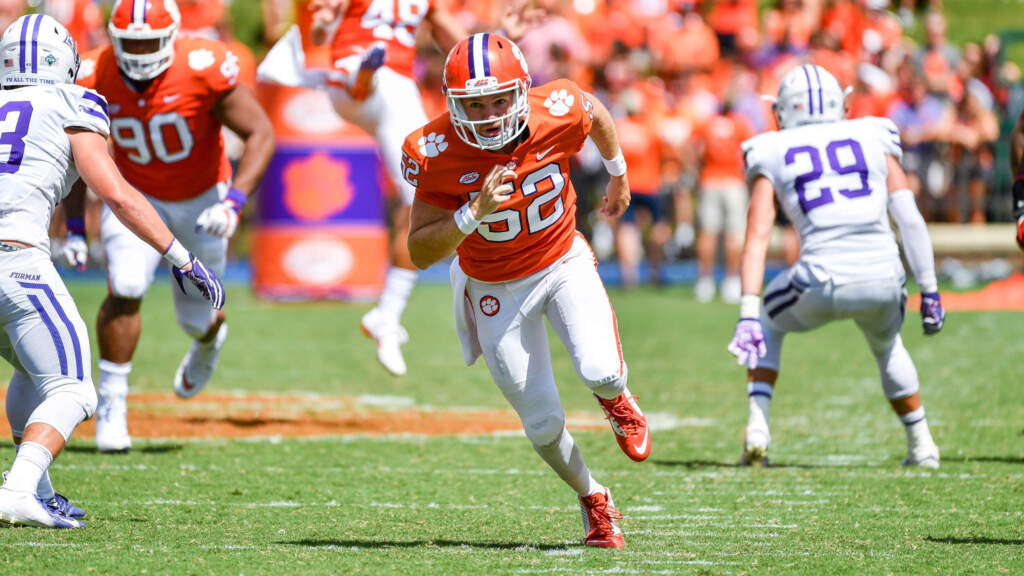