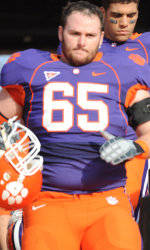 CLEMSON, SC – Thomas Austin, Chris Chancellor, and Kavell Conner have accepted an invitation to play in the 85th East-West Shrine Game. The Game will be held January 23, 2010, in Orlando, FL, kicking off at 3 p.m. EST.

“The East-West Shrine Game has always fielded players among college football’s best,” said East-West Shrine Game Executive Director Jack Hart. “With all 32 NFL teams represented by GMs, coaches and scouts during game week, our players have the terrific opportunity to showcase their talents and get their first glimpse of life in the NFL…`Just Like on Sunday'”.

While the teams are divided by East and West, the players come together for the beneficiary of the event, Shriners Hospitals for Children, an international pediatric specialty health care system.

Thomas Austin, a co-captain in 2009, was a third-team All-American by Sporting News in 2009. He was also named second-team All-ACC as an offensive guard after earning second-team All-ACC honors at center in 2008. Austin is a veteran of 48 games and 39 starts. He had 316 career knockdown blocks and played 2,548 career snaps, more than any other active Tiger. He was a five-time ACC Offensive Lineman of the week during his career. Austin graduated in August of 2009 and played the 2009 as a graduate student.

Chris Chancellor started more games at cornerback than any other player in Tiger history. He started his final 42 games and 44 overall while playing in a school-record tying 53 straight games. Chancellor was named an Honorable Mention All-ACC selection in 2009. He had nine career interceptions and was a member of the preseason watch list for the Thorpe Award in 2008 and 2009. Chancellor finished his career with 41 passes defensed, seventh best in school history. Chancellor graduated in August of 2009 and played this season as a graduate student.

Kavell Conner never missed a game in his Clemson career and had 27 starts including 25 in his last 27 games. He finished his career with 313 career tackles and led the team in tackles in both 2008 (125) and 2009 (111). Connor played well in bowl games with 43 career tackles in four bowl games, including 15 in the win over Kentucky in the Music City Bowl. Conner graduated in December of 2009.