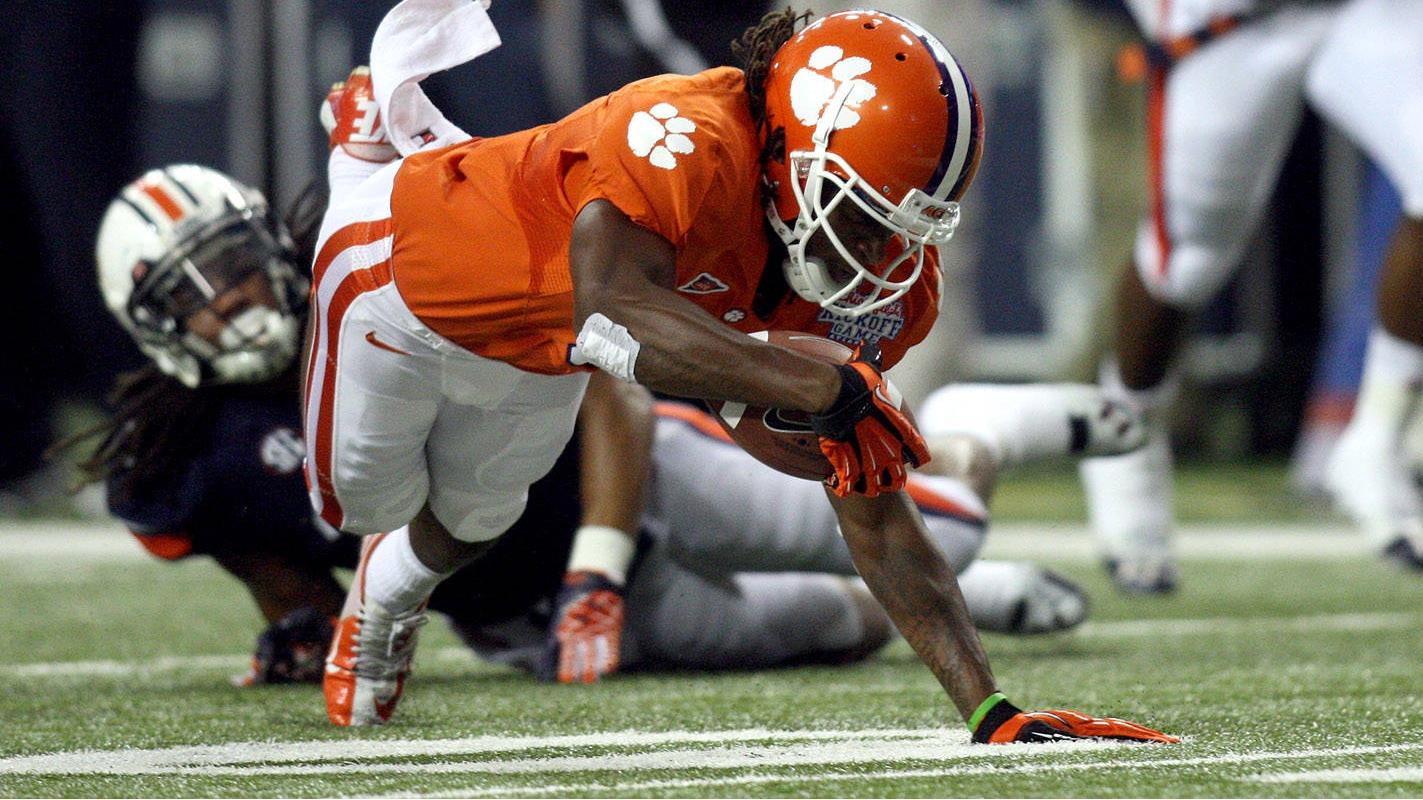 GREENSBORO, NC – Clemson running back Andre Ellington and center Dalton Freeman headline a list of eight players named as the Atlantic Coast Conference Football Players of the Week, announced by the conference on Tuesday. Ellington rushed for a nation-leading 228 yards and Freeman played every snap at center as the Tigers defeated No. 25 Auburn, 26-19. Virginia Tech also had two players recognized from its 20-17 Labor Day Monday night overtime win against Georgia Tech. Jack Tyler was named the Linebacker of the Week after tallying a conference-leading 17 tackles, and teammate Cody Journell was named the Specialist of the Week as he connected on a game-tying field goal on the last play of the regulation and the game-winning kick in overtime. Duke’s Conner Vernon, the Receiver of the Week, became the all-time leader in receptions in Blue Devil history. Florida State’s Bjoern Werner, the Defensive Lineman of the Week, had four sacks for minus-28 yards in just over one half of play. Wake Forest’s A.J. Marshall returned an interception 39 yards for a touchdown in a 20-17 win over Liberty and was named the Defensive Back of the Week. Miami’s Duke Johnson rushed for 135 yards and two touchdowns on just seven carries against Boston College in his debut.  OFFENSIVE BACK – Andre Ellington, Clemson, Sr., RB, 5-9, 195, Moncks Corner, S.C.Ellington gained 228 yards rushing in 25 carries to lead Clemson to a 26-19 victory over 25th ranked Auburn in the season opener in Atlanta.  Ellington’s total was the most in the nation this weekend, the most by a Clemson running back against an SEC team in history, and the most in a season opener.  Ellington had 80 yards rushing in eight carries in the fourth quarter when he set up two scores with long runs. The 228 yards ranks as the fifth-best effort by an ACC back against a ranked opponent. Ellington was named the National Running Back of the Week by College Football Performers and is one of four candidates for the National Player of the Week by ESPN.  Voting will take place during this week. OFFENSIVE LINEMAN – Dalton Freeman, Clemson, Sr., C, 6-5, 285, Pelion, S.C.Freeman played every snap (87) at center and graded a team best 94 percent in the win over Auburn.  Freeman had five knockdown blocks to lead the team in that category as well. The senior directed the Clemson offense from a pace standpoint, as the Tigers ran 87 plays for 528 yards, including 320 rushing yards.  It was the most rushing yards in a game for Clemson in three years.   Clemson ran for 137 yards in the fourth quarter and many of the key blocks were provided by Freeman.RECEIVER – Conner Vernon, Duke, Sr., WR, 6-1, 200, Miami, Fla.In Duke’s season-opening 46-26 win over FIU, Vernon caught 10 passes for 180 yards and one 28-yard touchdown. He averaged 18.0 yards per reception with five catches resulting in first downs as he became Duke’s all-time leader in pass receptions with 208, eclipsing the previous mark of 207 held by former high school and collegiate teammate Donovan Varner. In the ACC’s record book, he moved into fourth place on the career receptions list (208; passed NC State’s Jerricho Cotchery, Duke’s Donovan Varner & FSU’s Peter Warrick on the night) and into 12th place on the career receiving yardage chart (2,855; passed GT’s Kerry Watkins, Clemson’s Aaron Kelly, WF’s Desmond Clark & UNC’s Hakeem Nicks on the night). Vernon matched a school career record with his fourth game with 10 or more receptions (Roger Boone), and extended streak of consecutive games with at least one reception to 36 games, the nation’s longest active streak. DEFENSIVE LINEMAN – Bjoern Werner, Florida State, Jr., DE, 6-4, 255, Berlin, Germany  Werner turned in one of the top defensive individual performances in Florida State history as the No. 7 Seminoles defeated Murray State 69-3 in Saturday’s season-opener.  In just over one half of play, Werner registered five solo tackles – all of which came behind the line of scrimmage for minus-30 yards. Four of the tackles were quarterback sacks, accounting for minus-28 yards and matching the most by an FSU player since Alonzo Jackson recorded four at Louisville in 2002. Werner’s five tackles for loss came up one shy of the 45-year-old school record set by Dale McCullers against Memphis State in 1967. In addition to his tackles, Werner forced a fumble and broke up a pass. His performance earned him National Defensive Performer and National Defensive Lineman of the Week honors from the College Football Performance Awards, and the national Lott IMPACT Player of the Week. LINEBACKER – Jack Tyler, Virginia Tech, Jr., LB, 6-1, 236, Oakton, Va.Tyler had a huge game against Georgia Tech’s tough spread option attack, registering a career-high 17 tackles (seven solo) in Virginia Tech’s 20-17 overtime win. He also had a tackle for loss as the Hokies held GT to just 288 yards of total offense. DEFENSIVE BACK – A.J. Marshall, Wake Forest, Jr., CB, 6-0, 190, Durham, N.C.Marshall was instrumental in Wake Forest’s 20-17 win over Liberty.  Marshall had six total tackles including two solos and four assists.  He led the team with 1.5 tackles for loss and two pass break-ups.  His biggest contribution was an interception and 39-yard return for a touchdown late in the third quarter that pulled the Deacons into a 14-14 tie.  The interception was the first of his career. SPECIALIST – Cody Journell, Virginia Tech, Jr., K, 6-0, 195, Ripplemead, Va.Journell tied the game at the end of regulation with a 41-yard field goal and then won the game for the Hokies in overtime with a 17-yard field goal to help Virginia Tech defeat Georgia Tech, 20-17. ROOKIE – Duke Johnson, Miami, Fr., RB, 5-9, 188, Miami, Fla.Johnson was one of two true freshmen (Ereck Flowers, T) to start in Miami’s 41-32 win at Boston College as he totaled 135 rushing yards and two touchdowns on seven carries, the most rushing yards by a UM true freshman since Javarris James racked up 148 against Houston in 2006. He scored his career-first touchdown on a 54-yard scamper in the second quarter and added a 56-yard score in the third quarter. Johnson tallied team-high 214 all-purpose yards (135 rush, 10 receiving, 69 kick return).