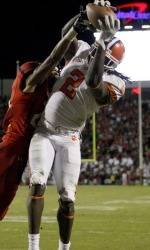 GREENSBORO, NC – Clemson freshman wide receiver Sammy Watkins and Miami linebacker Sean Spence headline a list of seven players named as the ACC Football Players of the Week, announced by the Atlantic Coast Conference on Monday. Watkins was named the Rookie and the Receiver of the Week for his play in the 56-45 win at Maryland, the second time this season he has picked up dual honors in the same week. It is the seventh award overall – four rookie and three receiver – for the true freshman from Fort Myers, Fla. Miami’s Sean Spence was named the Linebacker of the Week for the second straight week for his performance in the Hurricanes’ 30-24 win at North Carolina.

Watkins is joined by teammate Andre Ellington, the Offensive Back of the Week, who compiled a career-high 212 yards on the ground in the win at Maryland. Virginia’s Anthony Mihota, the Offensive Lineman of the Week, led an offensive line that helped Cavalier running backs amass 272 yards in a 24-21 win over No. 12 Georgia Tech. His teammate, Matt Conrath, was named the Defensive Lineman of the Week for his career-high nine tackles and a blocked field goal in the first quarter.

Georgia Tech’s Rod Sweeting, the Defensive Back of the Week, intercepted a pass in the second quarter and returned it for a touchdown. It was his third interception in the last four games. Florida State’s Dustin Hopkins, the Specialist of the Week, connected on his school-record 109th straight extra point conversion and hit two field goals in the Seminoles’ 41-16 win over Duke.

OFFENSIVE BACK – Andre Ellington, Clemson, RB, Jr., 5-10, 190, Moncks Corner, S.C. Ellington had a career high 212 rushing yards in 22 attempts to lead Clemson’s 306-yard ground attack in the win at Maryland. Ellington started the day strong with 60 yards rushing in the first quarter. He then iced the game with a 44-yard run for Clemson’s final score of the night. Ellington had five rushes of 10 yards or more, as Clemson scored its highest point total against an ACC team in 12 years.

RECEIVER and ROOKIE – Sammy Watkins, Clemson, WR, Fr., 6-1, 200, Fort Myers, Fla. The true freshman from Ft. Myers, Fla. had a school record 345 all-purpose yards against Maryland, the fourth highest total in ACC history. He had five kickoff returns for 207 yards, eight catches for 105 yards and a 33-yard rush in his only carry. The 207 kickoff return yards included an 89-yard return for a touchdown to put Clemson in the lead in the fourth quarter, 49-45, and a 70-yard return that set up a score in the first half. He also had two touchdown receptions, giving him nine for the year, third best in the nation. Watkins tied the Clemson freshman record for touchdowns in a game with three and set the school record for receiving yards in a season by a freshman with 728.

OFFENSIVE LINEMAN – Anthony Mihota, Virginia, C, Sr., 6-4, 285, Fredericksburg, Va. Mihota had the best performance of a stellar effort by the Virginia offensive line in the team’s 24-21 upset of No. 12 Georgia Tech. Mihota graded out at 95 percent while playing all 66 plays for the Cavaliers. He had nine knock down blocks during the game. Mihota helped to open the holes that allowed Virginia to rush for 272 yards and roll up 407 yards of total offense against the Yellow Jackets. It was UVa’s best rushing total since the 2004 season. With UVa leading 24-21, Mihota and the offensive line helped the Cavaliers run out the clock late in the game (the last 5:58), holding a 10:59 to 4:01 time of possession advantage in the fourth quarter.

LINEBACKER – Sean Spence, Miami, LB, Sr., 6-0, 224, Miami, Fla. Senior linebacker Sean Spence led all defensive players with 14 tackles, including a crucial sack late in the fourth quarter for a loss of seven yards. The Miami native finished the game with 1.5 tackles for loss for seven yards. Spence has been the anchor of the defense all season and has amassed 55 total tackles, 8.5 tackles for loss for 33 yards, three sacks for 23 yards and a forced fumble.

DEFENSIVE BACK – Rod Sweeting, Georgia Tech, CB, Jr., 6-0, 184, Locust Grove, Ga. Sweeting recorded his third interception over the last four games to move into a tie for 31st nationally. More importantly, his 32-yard INT return – Sweeting’s first career pick-six – tied the score with Virginia 14-14 in the second quarter. Sweeting had five tackles and a half-tackle for loss on the day.

SPECIALIST – Dustin Hopkins, Florida State, K, Jr., 6-2, 190, Houston, Tx. With four successful PATs against Duke, Hopkins established a new FSU school record, pushing his streak of conversions to 109. It snapped a record held by Derek Schmidt (108, 1984-86) for the past 26 seasons. Hopkins also converted a pair of field goals against the Blue Devils, including a 48-yarder into the wind at the end of the first half, which extended his streak of successful FG attempts to 17. That’s one field goal shy of Graham Gano’s career record 18 consecutive FG’s. In addition to his placement kicks, the Hopkins-led Seminoles lead the ACC in Kickoff Coverage with a 49.5 net average. Hopkins is one of three kickers in the NCAA’s FBS who has not missed a kick this year, making all 24 PATs and all 10 field goals.