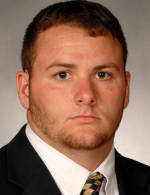 Lewis earned Offensive Back of the Week as he extended his national leading consecutive completions without an interception to 206 completions. Clemson’s Austin tallied 12 knockdowns in Clemson’s win over NC State to claim Offensive Lineman of the Week. A junior, Austin brought leadership to the Tiger line that started three red-shirt freshmen for the first time in 65 years.

Virginia Tech’s Warren took Defensive Lineman of the Week honors adding a forced fumble and a half tackle for loss to go along with 15 tackles in the win over Georgia Tech. Rey took Defensive Back of the Year honors by anchoring the Duke defense that held Navy’s vaunted rushing attack to only 207 yards, over 250 yards off their national leading rushing average. Rey also returned a fumble 37-yards for a touchdown to help secure the 41-31 victory over Navy.

North Carolina kicker Wooten booted three field goals in the Tar Heels’ 44-12 rout over Rutgers. Wooten earns his first Specialist of the Week honor after tying the freshman school single-game record for made field goals. Virginia Tech’s redshirt freshman running back Evans captured Rookie of the Week honors. Evans galloped for 94 yards on 19 attempts and scored a touchdown in his third consecutive game.

OFFENSIVE BACK — Thaddeus Lewis, Duke, QB, 6-2, 200, Jr., Opa-Locka, Fla. Lewis accounted for a total of 358 yards in the Blue Devil’s 41-31 victory over Duke. He completed 25-of-35 (.714) passes for 317 yards and 3 touchdowns and led Duke in rushing with a career-high 41 yards on 12 carries. He extended his school record and national leading total of consecutive pass attempts without an interception to 206. Lewis put Duke ahead for good with a 5-yard touchdown pass to Eron Riley midway through the third quarter. He later helped seal the victory in the fourth period by connecting with Riley on a 49-yard scoring strike to give Duke a 10-point cushion,

OFFENSIVE LINEMAN — Thomas Austin, Clemson, C, 6-3, 315, Jr., Camden, SC Austin graded 85 percent and had 12 knockdown blocks in Clemson’s win over NC State as the Tigers gained 428 yards of offense. The leader of an offensive line that started three red-shirt freshmen for the first time since 1943, Austin did not allow a sack and had four knockdown blocks on Clemson’s last drive of the game, a 96-yard drive that took 8:07 off the clock. Austin played all 59 snaps at center in the 91-degree heat.

DEFENSIVE BACK — Vincent Rey, Duke, OLB, 6-0, 240, Jr., Far Rockaway, N.Y. Rey made 12 tackles in Duke’s 41-31 victory over Navy. The Blue Devils held the Midshipmen to 207 yards on the ground, half of their NCAA-leading season average of 452 yards per game. Rey also tallied four tackles for loss, a sack and a 37-yard fumble return for a touchdown.

SPECIALIST — Jay Wooten, North Carolina, PK, 6-3, 185, Fr., Laurinburg, N.C. Wooten kicked three field goals and pinned Rutgers deep on kickoffs several times in the 44-12 win in Piscataway. Wooten’s first career attempt was a 43-yarder in the second quarter which tied the game at 3. He later converted kicks of 29 and 27 yards. He tied the school freshman record for most field goals made in a game with three.

ROOKIE — Rookie – Darren Evans, Virginia Tech, RB, 6-0, 215, r-Fr., Indianapolis, Ind. Evans ran for a career-high 94 yards on 19 carries in Tech’s win over Georgia Tech. he scored a touchdown for the third-straight game, taking it in from 8-yards out and had a long run of 24 yards on Tech’s game-winning drive.