Aspire to Be Great

One of the most underrated statistics in football is field position. Three (Clemson, Louisiana State, Ohio State) of the four teams in the College Football Playoff last season were in the top 10 in average defensive starting field position according to Coaches | By The Numbers, a statistical platform dedicated to college football analysis. Starting field position is largely controlled by two positions that are also highly underrated…placekicker and punter. Will Spiers knows this well.

“I’m trying to go out there and set up the defense in the best situation possible. Whatever is called upon me, I’m going to do. Hitting one 60+ yards or pinning one inside the 20 is great.”

This season, Spiers has excelled booting the football. He is on pace to shatter his career-best mark of 42.3 yards per punt, which he set last season. He could also set the single-season school record for punting average, which has stood for 30 years courtesy of Chris Gardocki, who punted for an average of 44.5 yards in 1990.

Spiers was not always a punter. He was a quarterback in high school and now serves as the team’s emergency quarterback, a position that has taken on new meaning in the era of COVID-19. He took reps at Georgia Tech, completing 2-3 passes for 13 yards.

During Trevor Lawrence’s bout with the disease, there was talk amongst fans that Spiers may have to take snaps under center. However, D.J. Uiagalelei filled the role quite well.

Spiers, the son of Bill Spiers and the grandson of Bud Spiers, grew up loving Clemson, attending games since he was 10 years old. Bud led Clemson to its first College World Series as a starting shortstop in 1958, leading the squad in home runs, hits, RBIs, total bases and slugging percentage.

His sons, Bill and Michael, also played baseball for Clemson, the former being a first-team All-American by Sporting News in 1987 and the latter being the MVP of the 1991 ACC Tournament. All three were coached by the legendary Bill Wilhelm.

Spiers’ father spent 13 years in Major League Baseball, the last four of which Will got to see in person as his father played for the Houston Astros.

“One of my first memories is going into the Astros’ clubhouse,” said #48. “I had my little uniform on, trying to look like the team. I would go in there and try to grab some Bazooka bubble gum.”

Will is still an Astro fan to this day. His cousin, Carson, who is Michael’s son, signed with the Cincinnati Reds this offseason after a spectacular career with Clemson as the team’s closer.

Spiers has one more family member with ties to the program. His sister, Ashley, is an administrative assistant in Allen N. Reeves Football Complex. 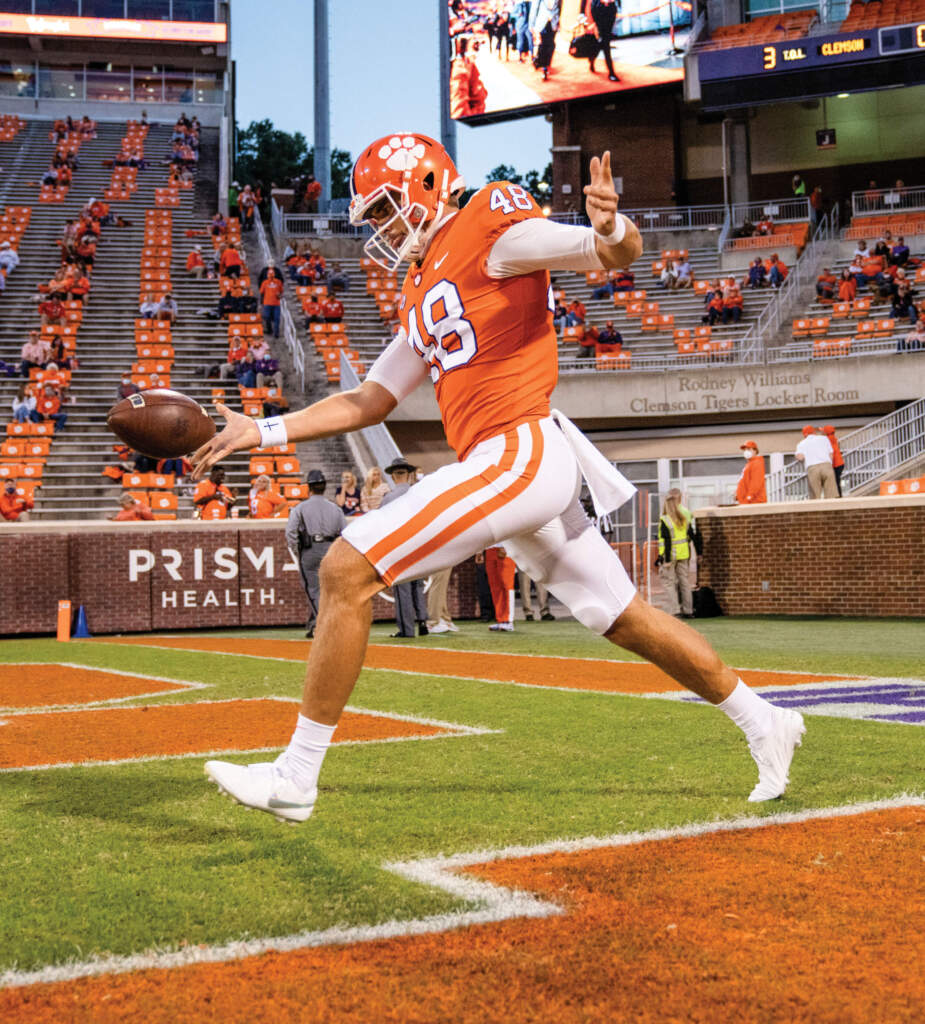 Will was a talented baseball player in his own right and had a chance to play both sports like his father, who punted for Clemson for one season, but he decided to focus his efforts on football.

“I equate it to golf sometimes,” explained Spiers. “There’s a lot of technique and mental skills you have to key in on and make sure you’re technically sound. One little thing can mess the whole thing up.”

One of his improvements this season has been dropping the ball lower to reduce the chance for error. Spiers has three types of kicks in his arsenal…traditional, rugby and sky.

Special Teams Coordinator Danny Pearman is proud of the progress Spiers has made.

“Will has worked exceptionally hard to become the best student-athlete he can be and is truly the total package. Despite coming to Clemson as a walk-on, he has developed not only into a great punter, but also into one of the best leaders on our team. He earned not just a scholarship, but also the respect of his teammates, coaches and this entire community by the way he has worked, performed and conducted himself in all areas.”

Head Coach Dabo Swinney was effusive in his praise as well.

Away from the gridiron, Spiers serves as a P.A.W. Journey ambassador. P.A.W. Journey was established by Swinney and Jeff Davis, current assistant athletic director for football player relations.

“I went on the service trip to Thailand, and that was my favorite experience,” said Spiers. “We worked at an elementary school while I was over there. We painted a fence and spent some time with the kids and played games. P.A.W. Journey has allowed me to use my voice more and has taught me to lead by example.”

Spiers, a construction science & management major, graduates in December with his bachelor’s degree. He most enjoyed his materials & methods class and hopes to put the information that he learned during that class to good use in his post-football career, either working for a general contractor or in sales.

Whenever Spiers leaves Clemson, he hopes to be remembered as giving the game all he had and being a committed teammate.

“Coach Swinney always tells us, ‘The days are long but the years are short.’ That’s one of the truest statements. It’s easy to keep looking ahead at what’s next, but it’s really important to just be in the moment.”