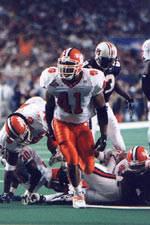 This feature was supposed to appear in the 1998 Clemson vs. South Carolina program. Anthony Simmons would have been on the cover of that publication, a fitting tribute to his career as one of Clemson’s greatest players, perhaps the greatest in the school’s 105-year history.

But, in January of 1998, our publication plans changed, as Simmons declared his eligibility for the NFL draft. It was a disappointment to all Clemson fans, but at the same time, they understood the decision.

Simmons was ranked among the best players in the nation, earning All-America honors from Associated Press in 1995, 1996 and 1997. Had he returned for his senior year he could have become just the second four-time Associated Press All-American in college football history (North Carolina’s Charley Justice from 1945-48). A 230-pounder with lighting quick speed and instincts, he was a certain first-round NFL draft selection.

“Looking back, I made a good decision,” said Simmons, who is entering his fourth year with the Seattle Seahawks. “It was a tough decision, I had great years at Clemson, but I felt I was ready for the next level. I had done my research, and received opinions from people I respected. I don’t recommend going pro to anyone unless you know for sure you are going to be a high draft choice. There are no guarantees past the first round. If you don’t make it and come back to school you aren’t on scholarship anymore.”

When an emotional Simmons made his declaration in January of 1998, he was defiant in his resolve to return to Clemson and earn his degree. The media had heard that one before. But, as has been the case with everything in his life, Simmons meant business. This past summer he was backing up his word, taking classes in both sessions of summer school, remaining in Clemson until two days before training camp began.

“I made a promise to my parents that I would come back and get my degree from Clemson. It means a lot to them and it means a lot to me. I am not going to play football forever. Although I should be set financially, I want to be productive in the business world when my football career is over. You need the degree.”

Simmons, who never red-shirted at Clemson, will need another semester and a summer to complete his requirements. If the Seahawks don’t make the playoffs, he could be back for the spring semester of 2002. He plans to take a course at the University of Washington during the season. That is fitting since his Seattle Seahawks play at Huskie Stadium.

“Anthony’s word is good,” said Clemson defensive coordinator and linebacker coach Reggie Herring, who coached Simmons his entire career in Tigertown. “He made a promise to his family that he would finish his degree and become a strong alumnus of this University. It draws attention to young people that even if you have a dream of becoming an NFL player, it is still important to get your degree. I am proud of Anthony. He is a man of his word.”

Having success in the NFL and his commitment to return to Clemson and get his degree is no surprise to Herring. “He sets high standards in everything he does. On the field, he came to work everyday and continues that attitude in the NFL. He missed just one practice at Clemson in three years and those work habits are carrying over to the NFL. He is building a great reputation in the NFL and it is due to his work habits.

“He possesses tools that god only gives to certain people. He has always had the focus to use those tools and that is now paying off. I never had any doubts about his ability to make it in the NFL.” While Herring never had any doubts, Simmons himself might have had some during his rookie year in the NFL. A knee injury in his first preseason game as a professional slowed his progress and made his rookie year a trying experience.

“When you enter the NFL as the number-15 draft choice of the entire league you expect to have an immediate impact. I suffered a knee injury in my first preseason game and all of a sudden people were writing that I was a first-round bust. It was tough to deal with because I had never been injured in high school or at Clemson. I wasn’t used to being on the sidelines. It was difficult to go through, but looking back it made me stronger. I was presented with a physical challenge for the first time and overcoming it made me stronger.”

Simmons played in 11 games in 1998, four as a starter and had 41 tackles, including 31 solos. A highlight of the season was a 36-yard interception return of a Vinny Testaverde (New York Jets) pass for a touchdown. In 1999 he earned a starting position the week of the first game and started all 16 games, plus a playoff game. He more than doubled his tackle total and finished the year with 90 stops, third on the team.

Last season was a breakout campaign for Simmons. Now totally healthy (he had had offseason surgery prior to the 1999 season), the native of Spartanburg, SC led the Seahawks in tackles with 147. No other Seahawks player even had 100. The 147 tackles rank third best in team history and the figure was the fourth highest in the entire NFL in 2000. He led the Seahawks in tackles eight times, including four of the last five games.

“I felt I had a good year last season. I had played inside linebacker in 1999 and moved outside in 2000. That is a much more comfortable position for me.”

The sky is the limit for Simmons in 2001. Earning a Pro Bowl selection is a goal for the linebacker who led Clemson in tackles in 1995, 1995 and 1996. The offseason acquisition of another former Clemson linebacker should make his job a lot easier. All-American Levon Kirkland, who had played eight distinguished seasons with the Pittsburgh Steelers, signed a contract with the Seahawks in the offseason and should be Simmons running mate on the second line of defense this year.

“I am really looking forward to playing with Levon. When I came to Clemson he was one of the players you heard about. He represented the Clemson linebacker tradition. Now I will be playing with him. It will be great for both of us and great for Clemson University.” It will be a great day for Clemson and for Anthony Simmons when he walks across the stage of Littlejohn Coliseum with his college degree.