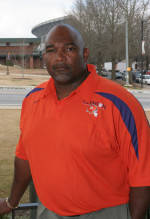 Clemson, SC – Andre’ Powell, who has over a decade of experience as an assistant coach in the Atlantic Coast Conference, has been named running backs coach at Clemson. Head Coach Tommy Bowden made the announcement on Monday. Powell replaces Burton Burns, who accepted a coaching position at Alabama last month.

Powell comes to Clemson after six years at the University of North Carolina as running backs coach. He also served as special teams coordinator the last two seasons.

“Andre’ has been a respected coach in the ACC for many years,” said Bowden. “He has tutored some of the top running backs in the ACC in the last decade, including (All-Pro New York Giant) Tiki Barber and (Super Bowl MVP) Willie Parker. He knows what it takes to get to the next level. He has considerable experience from a recruiting standpoint in this area of the country and has extensive experience when it comes to special teams. North Carolina’s kick coverage unit was second in the ACC last year and that is certainly an area we are looking to improve this coming season. We look forward to having Andre and his family join the Clemson family.”

Powell coached North Carolina running back Ronnie McGill throughout his career and he finished 10th in Tar Heel history in rushing yardage with over 2300 yards. He also had success on special teams. The Tar Heels ranked seventh in the nation in kickoff returns in 2005 and had two kickoff returns for touchdowns each of he last two years, the only ACC team to do that. In 2006 the Tar Heels were second in the ACC in kickoff return coverage.

Carolina had one of the top rushing attacks in the Atlantic Coast Conference in 2004, averaging 176.3 yards per game and 4.9 per carry, the second best mark in the league. Three different Tar Heels each had at least one 100-yard rushing game and all three averaged over five yards per carry for the season.

Powell came to Carolina after spending five seasons at the University of Virginia, where he coached wide receivers and running backs. He coached several former Cavaliers who currently played in the NFL, including tailbacks Tiki Barber and Thomas Jones and wide receivers Germane Crowell, Pat Washington, Charles Kirby and Terrence Wilkins.

Powell earned his bachelor’s degree in health, physical education and recreation in 1989 from Indiana, where he was a two-year letter winner at running back. He was a member of Hoosier teams that participated in the 1986 All-American Bowl and the 1988 Peach Bowl and was the team’s Most Improved Player as a senior. He was the lead blocker for 1,000-yard rusher Anthony Thompson in 1988.

Powell and his wife, Jody, have a son, Andre’ II, and two daughters, Alayna and Mikala.