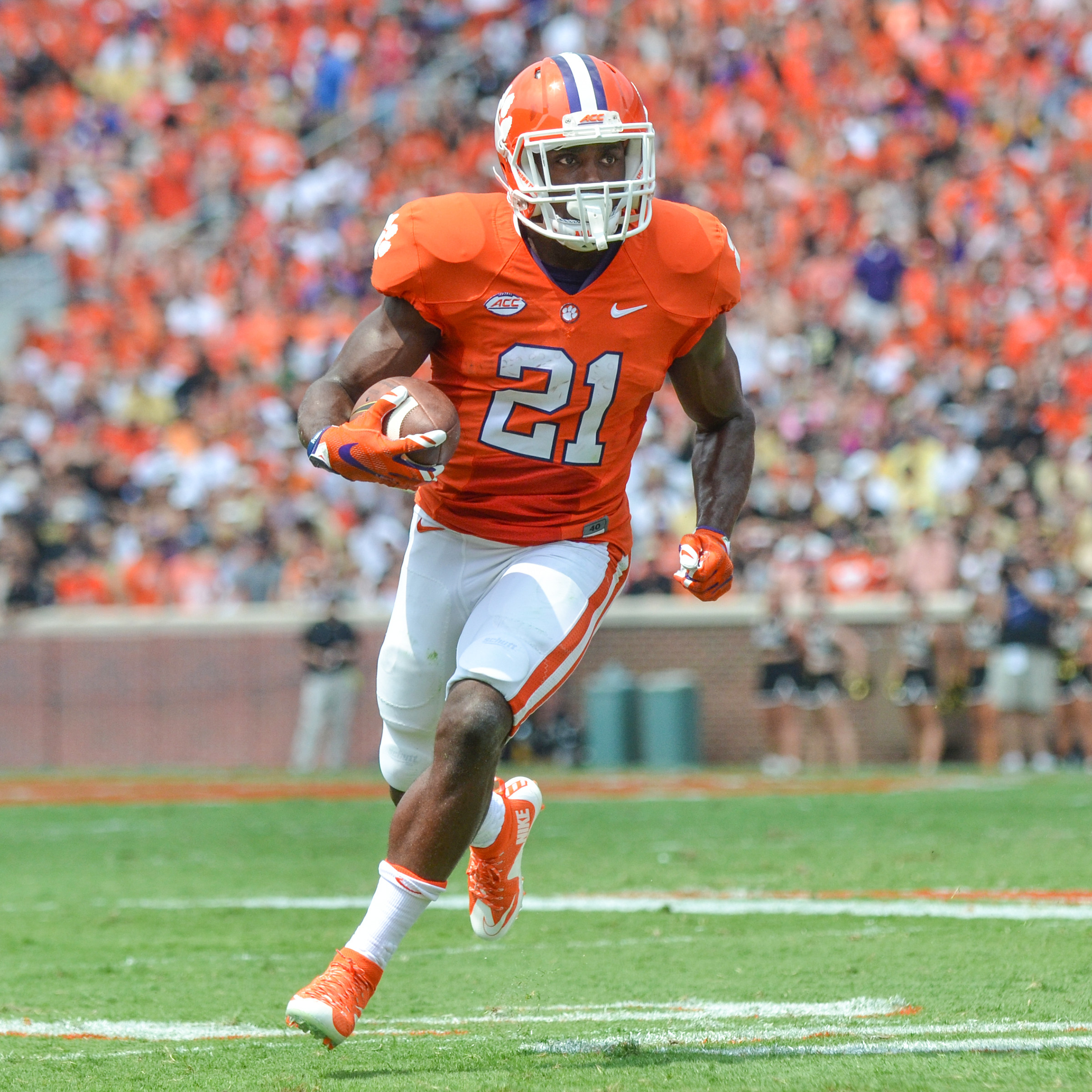 C.J. Davidson grew up playing football not too far from the shadows of Memorial Stadium, so it is easy to surmise the game was ingrained in him from an early age.

He was born and raised in nearby Seneca, S.C., and played the game from the time he was six years old.

One could also surmise that growing up near Clemson made him a Tiger fan as well.

“Just being from the area, you’re always going to be surrounded by Clemson,” he said. “It was a good environment to be around.”

Davidson’s love of sports did not end with football, however. As an eighth grader, he blossomed into an elite track & field athlete.

“I was ranked highly in events like the long jump and triple jump, and it took off from there as far as scholarship offers and invitations to bigger track meets,” said Davidson. “That turned my focus towards track for the rest of my high school career, and eventually led me here.”

After a year at Seneca High School, he transferred to the Bobcats’ rival, Daniel High School, in Central, S.C. Davidson shined in blue and gold for the Lions’ basketball, football and track squads.

He was the AAA state champion in the triple jump and silver medalist in the long jump. As a result of his efforts, he was named Boys Track Athlete-of-the-Year by Anderson Independent. Davidson’s success was not limited to the state of South Carolina. He also placed fourth in the triple jump at the 2010 New Balance Outdoor National Championships.

Davidson signed a national letter of intent with the Tigers’ track & field program and joined the team for the 2011-12 season. He performed consistently, but cited an injury during indoor season that forced him to open his eyes to other possibilities.

“I had a great relationship with all of the coaches and team members, but I went through a period where I strayed away from the passion of track,” admitted #21. “I knew I eventually wanted to play football here, and when the opportunity came, I took it.”

Davidson met with running backs coach Tony Elliott in the summer of 2012 and told him of his desire to join the football team. He was not able to join the team in August camp and did not officially earn a roster spot until the opening week of the 2012 season when Clemson was preparing to face Auburn in the Chick-fil-A Kickoff Game.

A running back throughout high school, Davidson began his college career as a defensive back for Charlie Harbison’s unit. He ended up making the travel squad by season’s end, earning his first appearance in November at Duke as part of Clemson’s special teams.

“I eventually made the switch (to running back),” he said. “But it was a matter of slowing everything down and getting acclimated to the college game. After a while, I figured out that I could make an impact and start playing.”

Through the mentorship of close friends DeAndre Hopkins (who had given head coach Dabo Swinney a strong recommendation on Davidson’s behalf) and fellow running back Roderick McDowell, he ultimately achieved one of his biggest dreams by earning a football scholarship.

“Oh man, that was an emotional moment,” stated Davidson. “It was one thing I actually had to work for in my life and go get it. To be rewarded for your efforts is always a great feeling.”

With Davidson on scholarship, he saw a consistent increase in playing time during the 2013 and 2014 seasons. He scored four touchdowns as a reserve in 2013, including two against Wake Forest in a 56-7 victory. In 2014, he nearly doubled his carries, toting the ball 64 times for 248 yards and three touchdowns.

But amidst his successful run from track athlete to walk-on to scholarship football player, Davidson also fought through the lowest of lows. He earned a start and ran well in Clemson’s primetime showdown against the defending national champions, top-ranked Florida State, in September 2014.

But he wishes he could take back one moment, a fumble that was recovered by the Seminoles in the fourth quarter with the Tigers driving for the potential go-ahead score late in regulation.

“Initially, it did bother me because it was one of the more adverse things I’ve ever faced.”

The moment stung from a personal standpoint, but he persevered and ultimately had more opportunities to shine.

Against Boston College, the Tigers trailed 13-10 in the fourth quarter at Alumni Stadium. Following a third-down conversion, Davidson got the call a few plays later and found paydirt from 32 yards out in what proved to be the deciding score of Clemson’s 17-13 road victory.

One of Davidson’s best moments occurred off the field in May 2015. He graduated from Clemson, becoming one of eight active players on this year’s team competing with a degree already in hand.

“He got that off his chest and he’s carried himself differently,” said Elliott, his position coach. “I’ve been proud of the way he’s responded and pushed his teammates.”

One back in particular, Wayne Gallman, continues to be a big fan of what Davidson brings to the table for the Tigers.

“I got here the same time he earned a scholarship, and it showed the type of person and hard worker he is,” said Gallman. “I always tell C.J., to be ready, because it’s going to be his turn and he has to be ready.”

More times than not, Davidson has been able to answer the bell. He attributes much of that to his growth as a man over these last five years.

“Clemson has truly helped me grow into a man,” he added. “The success, the ups and downs, the adversity…it all made me who I am now.

“I can definitely say the things I’ve obtained here I can take with me for the rest of my life.”