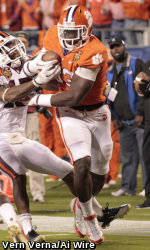 “This is a great honor,” said Dwayne Allen. “This is a dream come true. Ever since I found out there was an award for the best tight end it has been a goal to win the John Mackey award.

“I want to thank Head Coach Dabo Swinney, my position coach Danny Pearman, offensive coordinator Chad Morris and all of my teammates. They have all had a great impact on our success this year and they are the reason I am here (in Orlando) tonight.

His two touchdown catches gave him one more than former Pittsburgh Steeler great Bennie Cunningham had in 1974 when he was named a first-team All-American. Allen now has 12 touchdown receptions for his career, tied for first in school history with another former Steeler tight end, John McMakin.