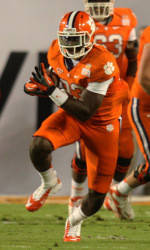 CLEMSON, SC – Clemson junior tight end Dwayne Allen announced Friday that he will enter the NFL draft in April and will not return to Clemson for the 2012 season. Allen was the consensus first-team All-America tight end and was the winner of the John Mackey Award as the nation’s top tight end.

“Never have I been more proud of a player’s development than Dwayne Allen,” said Head Coach Dabo Swinney. “Clemson has made a huge impact in his life and he has helped Clemson achieve at a level not seen in 20-plus years. Dwayne has a great future, and I fully support his decision to enter the NFL. I look forward to watching him continue his journey. He will be a great ambassador for Clemson for years to come.”

The native of Fayetteville, NC finished the year with 50 receptions for 598 yards and eight touchdowns, helping Clemson to its first ACC Championship in 20 years. He established Clemson single season records for all three statistics for a tight end. The 598 receiving yards were fifth most in ACC history for a tight end. His season included a pair of touchdown receptions from quarterback Tajh Boyd in the ACC Championship game victory over Virginia Tech on December 3.

“I also want to thank my coaches, Coach Dabo Swinney, my position coach Danny Pearman and offensive coordinator Chad Morris. They have helped me grow as a player and as a person.

“Finally I want to thank everyone in Tiger Nation for their support over the years. I want to especially thank them for being patient with me.

“I am basically turning professional because I feel I am ready. This is the appropriate time. I have matured as a player and a person over the last four years at Clemson and this experience has prepared me for the next level. I have just 13 hours (of course work) left to graduate and I will be a proud Clemson graduate.”

Allen was named first-team All-American by Associated Press, the Football Writers Association, ESPN.com, Si.com and Phil Steele and was a second-team selection by CBSsports.com. He was the first Clemson tight end to make an All-America team since Bennie Cunningham in 1975. Allen was a first-team All-ACC selection as well.

Allen caught at least one pass in every game this year and in 26 of his last 27 games over two seasons. The Discover Orange Bowl against West Virginia was his 28th consecutive start.

In Clemson’s win over Auburn earlier this year, Allen caught seven passes for 80 yards and a score and was named the John Mackey Award National Tight End of the Week. He also had four catches for 61 yards in the win over Florida State and four for 75-yards and a touchdown in the win over 10th ranked Virginia Tech in the regular season.