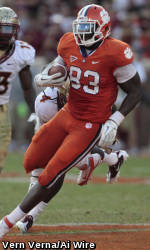 Clemson tight end Dwayne Allen has been named one of eight semifinalists for the John Mackey Award. The Mackey Award goes to the top tight end in the nation and is presented by the Nassau County Sports Commission of Bethpage, NY.

Allen is joined on the list by Orson Charles of Georgia, Drake Dunsmore of Northwestern, Tyler Eifert of Notre Dame, Coby Fleener of Stanford, Ladaarius Green of Louisiana, Jacob Pederson of Wisconsin and Nick Provo of Syracuse.

Allen has been a model of consistency as he has at least for receptions in each of the last eight games. He had seven catches for 80 yards in Clemson’s win over defending National Champion Auburn back in September and had four for 75 and a touchdown in the 23-3 win over a top 10 Virginia Tech team. He had two clutch receptions for 33 yards on Clemson’s drive to a winning field goal against Wake Forest this past Saturday. His last reception, a 17-yard catch from Michael Palmer’s record for reception yards in a season.