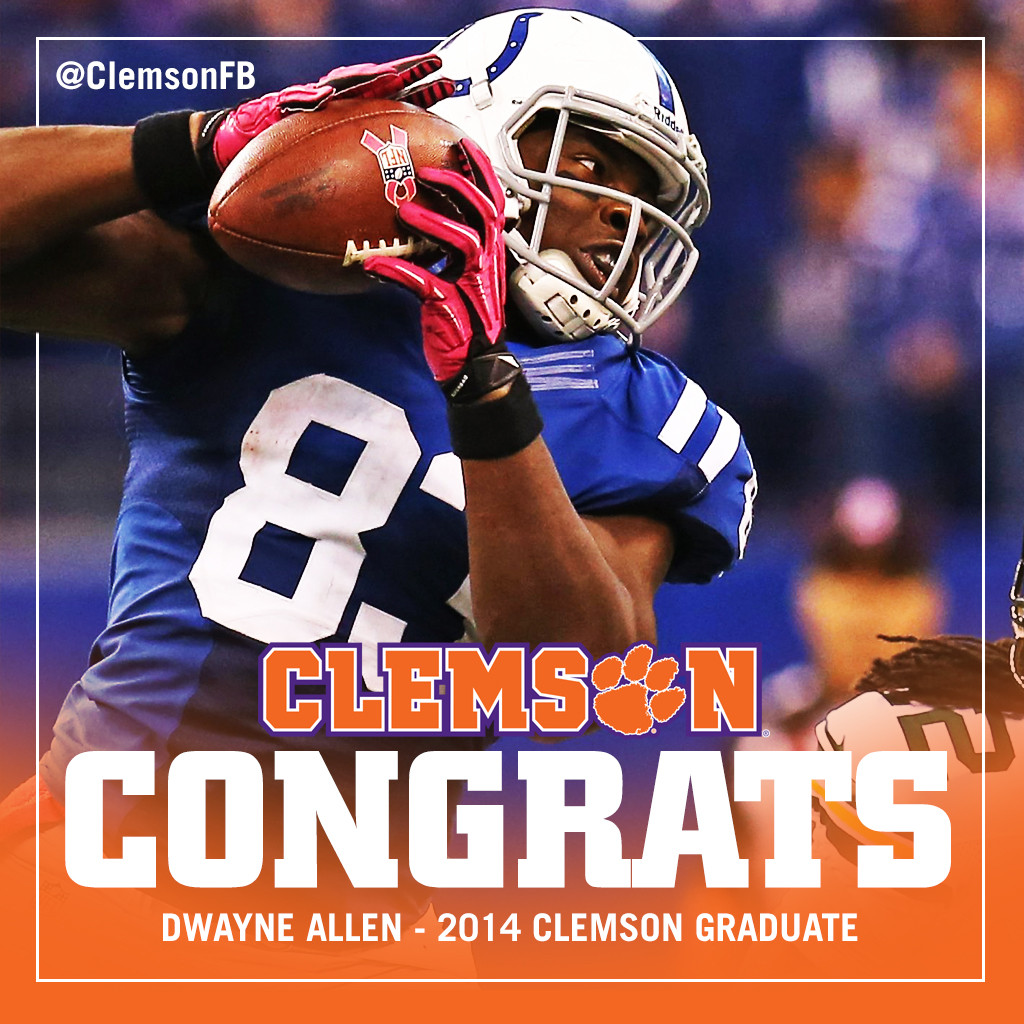 Thirty-six years ago,  I was a part of college sports history from an academic standpoint.  That day, former Notre Dame consensus All-American basketball player Adrian Dantley, received his undergraduate degree, the first college basketball player to turn professional after his junior year to return to school and earn a diploma.

I received my master’s degree from Notre Dame that day, and since I was going to be at graduation anyway, I was given the added duty of taking Dantley and Head Coach Digger Phelps to the Golden Dome after the ceremony to help coordinate the picture that would run on the Associated Press wire service.

And now I am writing a blog about a former Clemson consensus All-American football player, Dwayne Allen, who returned to Clemson to earn his degree two years after entering the NFL draft a year early.

It was also a landmark day at Clemson because Vic Beasley is graduating as well, meaning two consensus All-Americans graduate from Clemson on the same day for the first time.

Allen’s graduation is particularly noteworthy.  When you turn professional these days, you take the second semester off to prepare for the NFL draft.  That adds about 15 hours of classes to what a young man has to pass while still in the early stages of his professional career.   That is one of the reasons Beasley came back for his senior year,  he wanted to get that degree and do it without having to worry about it while he was in the NFL.

Allen has many goals past his playing days and that is why he was motivated to get his Clemson degree.  “I am not going to play football for 20 more years,” said Allen, who was a freshman in 2009 behind Michael Palmer, now a member of the Pittsburgh Steelers.

“Today was the first step to a new career.  I like to think I am a progressive thinker.  I need to look at the next phase of my career and getting a degree from Clemson was the first goal.”

Clemson has had 22 football players turn professional after their junior year and seven have returned to school to get their diploma.  Only one, Dexter Davis, did it in the first 20 years that juniors were eligible for the draft.  (We should also mention that the late Chester McGlockton, a first round draft choice from Clemson in 1992, got his degree at UT Martin while he was an assistant coach there.)

Six of the seven Clemson graduates who turned professional a year early (Keith Adams, Derrick Hamilton, Justin Miller, C.J. Gaddis, Jamie Harper and now Allen) have returned to Clemson since Dabo Swinney became the head coach in December of 2008. That speaks volumes of Swinney’s care for players who have been Clemson Tigers.

The first four mentioned did not play for Clemson when Swinney was the head coach.  Adams played before Swinney was even an assistant coach.  But, he encouraged the young men to return and get that degree.  He has continued to do it this year with Phillip Merling and Leroy Hill, who both recently retired from the NFL.  They are both student assistant coaches and are at practice every day.

Allen is an example of positive impact Swinney’s program has had on many young men. “Coach Swinney and the entire Clemson program have been so supportive.  I have heard  from Coach Swinney, Coach (Chad) Morris and Coach (Danny) Pearman all he time. They asked me when I am going to get my degree.  Today I have been taken off of Coach Swinney’s list of former players to bug.”

Allen’s junior year he was a consensus All-American and won the John Mackey Award as the top tight end in college football.  He decided to turn professional and is now a starter for the Indianapolis Colts.

Allen’s continued involvement as a Clemson family member was demonstrated a couple of weeks ago when he introduced Clemson manager David Saville at the National Down Syndrome Convention in Indianapolis.   Saville is a great story himself, as he is in his fourth year in the Clemson Life Program.  He is also a manager for  the Clemson football team.   Allen gave a heartfelt account of how David has become an inspiration to many Clemson players.

Allen made the extra effort to celebrate his graduation at Littlejohn Coliseum. The night before he was in New York, playing in an exhibition game against the Jets.  He had a 3:30 AM walkup call and was on a plane in a New York airport by 5:00 AM.  He was in Clemson by 9:00 AM.

Allen could have just gone back to Indianapolis and had the Clemson Registrar mail the diploma. But he wanted to be in Clemson for the ceremony.

“I was not going to miss this day for anything.  When I walked across that stage and saw my family (20 strong), I was proud.  I am the first one to graduate from college in my family and I want my nieces and nephews to know there are no limitations.  You can become anything you want to be.”