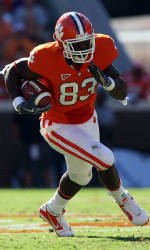 CLEMSON, SC – Clemson tight end Dwayne Allen has been named one of 22 Midseason Watch List Candidates for the 2010 John Mackey Award, the honor that goes to the top tight end in college football. Allen is one of three ACC players on the list that includes George Bryan of NC State and Zach Pianalto of North Carolina.

Allen, one of just three sophomores on the list, is Clemson’s leading receiver this year with 19 catches for 259 yards and a touchdown. He had a career high seven receptions for 55 yards at North Carolina and had 5-66 at Auburn. He has had at least one reception in every game this year.

The John Mackey Award is presented by the Nassau County Sports Commission in New York. The list of semifinalists will be announced November 15 and the finalists on November 22, 2010. The award winner will be announced on December 9 at the ESPN College Football Awards Show in Orlando.