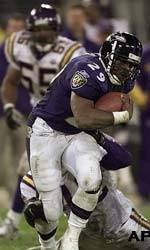 Allen Makes a Run At the Super Bowl

OWINGS MILLS, Md. (AP) – After riding for 12 years on a carousel that carried him through five NFL franchises, Terry Allen is ready to grab the ring.

Super Bowl ring, that is.

Allen’s first legitimate shot at being a part of a championship football team might be his last. Playing in what could be his final season, the 33-year-old running back is doing his best to bring the Baltimore Ravens another title.

“On my fourth try, I’m finally with a team that has a chance to do it all,” he said. “That’s what I came here for, a chance at the Super Bowl.”

Actually, the Ravens are Allen’s fifth NFL team. He broke into the league in 1990 with the Minnesota Vikings, then spent four years with the Washington Redskins, one with New England and last season with New Orleans.

He was waiting by the phone last summer when the Ravens called and made him the successor to the injured Jamal Lewis, a key figure in Baltimore’s championship season.

Allen’s first 13 weeks with the Ravens produced plenty of pain, some serious mental anguish and a mere 360 yards rushing. Then, finally, he fulfilled his quest to become an integral part of the offense.

He hopes to continue his run of success Sunday against the top-seeded Pittsburgh Steelers.

“I’ve been on some teams that were good enough to get to the playoffs, but deep down you knew we had to have some help. This team can do it,” Allen said. “Early in my career, I could say, `We’ll try it again next year.’ But there may not be a next year for me, so this is it.”

The season is certainly ending better than it started for Allen, who had 37 yards in 20 carries in the opener against the Chicago Bears. Over the next five weeks he broke the 100-yard barrier only once, and by the time he sprained an ankle on Oct. 28 against Jacksonville, many Ravens fans were clamoring for backup Jason Brookins to get the majority of the carries.

Allen returned from a two-week absence against Tennessee, but on his first carry he was struck by a helmet, fumbled and staggered off the field with a broken hand.

He missed the next three games. But that miserable stretch of inactivity provided Allen with the mental and physical strength he needed to make an ample contribution toward the Ravens’ march to the playoffs.

“That’s the one silver lining of the hand injury,” head coach Brian Billick said. “We knew as the season went on, Terry was going to wear down just because where he is in his career. You can see he’s fresh and strong, and I think that’s going to help us.”

The Ravens ran the ball only 13 times in their last game against Pittsburgh, a 26-21 defeat. The plan this week is to employ Allen as part of a balanced offensive attack.

“We had our running game clicking last year, and I think we can get like that with Terry,” center Mike Flynn said. “He gives us that hard type of rusher. If our running game is on, we can accomplish a lot of the things we did last year.”