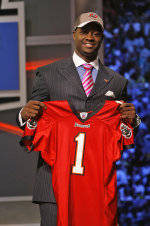 Adams Taken in First Round of NFL Draft by Tampa Bay

Clemson, SC-Clemson defensive end Gaines Adams, a unanimous first-team All-American and ACC Defensive Player of the Year, was selected in the first round, the fourth overall selection by the Tampa Bay Bucs on Saturday afternoon. Below are some notes and quotes on the selection.

Notes on Gaines Adams First Round Selection in 2007 draft

*Ten Schools have had at least one first-round selection each of the last two years. Three of the 10 are ACC Schools. In addition to Clemson and Florida State, Miami (FL), Florida, LSU, Ohio State, Oklahoma, Penn State, Tennessee and Texas are also on the list.

*Clemson has now had at least one first round draft choice each of the last two years. This is the first time since the 1997-99 drafts that Clemson has had a first round pick in consecutive years.

*Gaines Adams is the third first-round selection under Tye Hill (#15 in 2006 by St. Louis Rams). All three earned their degrees from Clemson. Adams graduated in December of 2006.

*Adams is the seventh player in history drafted by the Tampa Bay Bucs. The first Tiger taken by the Bucs was Jeff Davis, a fifth-round pick in 1982. Davis went on to become the captain of the Tamp Bay Bucs team from 1984-87. He played 83 games in six years for the Bucs.

*Prior to Adams, the highest draft pick from Clemson taken by the Bucs was Rudy Harris in 1993, who was a fourth-round choice.

*Adams was the 190th Clemson player in history taken in the NFL draft, the 21st first-round selection. Only Miami (FL) and Florida State have more first-round picks among ACC schools than Clemson.

“I am very happy for Gaines and his family. He showed patience in January of 2006 when he decided to come back for his senior year and that patience paid off today.

“That has been a pattern with our first round picks. Tye Hill (2006) probably could have turned pro early and been a middle round pick, but they came back for their senior year and it made a big difference.

“Gaines selection as the number-four pick in the NFL draft puts a cap on one of the greatest careers in Clemson football history. You have to go back to Banks McFadden in 1939 to find the last time Clemson had a player chosen this high in the draft.

“He was also just the second unanimous All-American in Clemson history (Terry Kinard 1983). And, he graduated this past December. Good things happen to good people.

“When we signed him five years ago I thought he had a chance to play professional football, but I didn’t know he would be a first-round draft choice, never mind being a top five NFL pick.

“It did not surprise me a bit that Tamp Bay selected him. They did a lot of research and Monte Kiffin, one of the best defensive coaches in the business, spent two days here in the spring.”

(On how he will fit in with the Buccaneers defense) “I feel like I’ll fit in great. Being with Simeon Rice and those other guys who are there, they’ve got a tremendous record with that defense and I’m just ready to get started with them.”

(On the rumors he might be traded) “That was something I didn’t have control of. I’m a Buc right now. I’m enjoying this day. I’m just ready to get down there and get this started.”

(On what he brings to this team) “I bring a hard worker. I’m willing to learn. I’m a dedicated guy that loves football.”

(On if he believes he’s the best pass rusher in the draft) “I feel that way. That was one of my goals coming into this draft and I feel like my college career shows that, and now, I’m just trying to take it to the next level.”

(On if he had a sense that he would be a Buccaneer) “Yes. I talked with Coach Gruden and Coach Kiffin and they showed a lot of interest in me. We had a good time together. We talked football a lot and I told them that I would fit in great with them.”

(On if he was confident he would be a Buccaneer) “No, not at all. I came into the draft with an open mind, knowing I had no control over where I would end up. I just knew that at one certain pick, I was going to be at one team, and I’m glad it was Tampa.”

(On what the Buccaneers expect him to do) “We haven’t talked about that yet. I’m going to go in and work hard, and hopefully, one day, I’ll be starting.”

(On his phone call from the Buccaneers) “Coach Gruden called me and said that they were going to send my name in and briefly told me about Tampa. He put me on the phone with Coach Kiffin and everybody just to say ‘Congratulations.’

(On what Coach Kiffin said to him) “He just told me congratulations and that he is ready for the season.”

(Opening statement) “We’re excited to have selected DE Gaines Adams. We said earlier, as the offseason began, that we wanted to upgrade our pass rush. We feel like we did that today. He is a fine football player. We’re eager to put him in our colors and get him started. He’s a good football player with a chance to be great and it certainly addresses an area that we want to improve at.”

(On if the Buccaneers would trade DE Gaines Adams to Detroit) “There’s a lot of speculation, honestly, about us trading up or trying to trade our pick. We’re happy to have Gaines Adams. Unless something drastically changes, we fully expect him to be a Buccaneer for a long time. There were a lot of rumors and speculation that weren’t true, but there is a lot of hype at the top of the first round and obviously that is the case again this year.”

(On Gaines Adams) “I’ll say that he is a guy we think is the number one defensive player in his draft. There were some other players, honestly, that we would have loved to have had. But you only get to pick once, unfortunately. We got a guy that we think is an outstanding player and he has a chance to be a great pro football player. He’ll fit in our scheme nicely and I think he’ll have the talent to update our pass rush immediately.”

(On the temptation to draft QB Brady Quinn as an offensive-minded coach) “I’m a football coach. I want to win games. Obviously, you want to take what you think your football team needs. At the same time, we have to take a good look at who we think is the best football player on the board. We took Carnell Williams two years ago, I would have loved to have a rocket backfield with [Adrian] Peterson and Cadillac (Williams), no question about it. You look at Gaines Adams and the pass rush that he brings to our football team, we thought it was the best move for us at this point.”

(On Adams during the interview process and what impressed him above other players) “Gaines doesn’t talk very much; he’s a quiet guy. He’s a man of few words, I think you’ll sense that quickly. I think he just gets your attention when he hops over those bags and runs through the drills at the combine. If you watch his tape, he is a problem. He’s a very good pass rusher and he’s had some good training. To get Kevin Carter, a veteran player in free agency and then to add a guy like Gaines Adams, we’ve added two big men that will give us a lot more versatility in some of the things we want to do defensively.”

(On the situation at right end with DE Simeon Rice) “We’re going to work that out. Obviously, when you draft and when you acquire free agents, you have to do some things with the depth chart. We’re going to play the best player, whoever it is. Simeon is making a recovery from an injury. It’s an injury that I think has proven to be healthy now. We’ll address all of those things as time unfolds, but we did acquire a heck of a football player today.”

(On how Defensive Coordinator Monte Kiffin reacted to the selecting of Adams) “Monte is jumping through the ceiling right now. He said we haven’t drafted a defensive player since 1974 or 1986 or something like that. I said, ‘We haven’t had a lot of number one picks around here, Monte, in the last seven or eight years.’ The bottom line is, to go with Cadillac [Williams], to go with Davin Joseph, Gaines Adams – hoping Mike Clayton comes back healthy – I think the three or four first rounders that we have brought in are good people, good players and hopefully a couple of these guys can prove to be great at their position.”

(On if the team was content to sit at the fourth pick) “I was surprised that people really speculated that we would sacrifice a lot of picks and move up. Honestly, we feel like with the four picks that we do have here on the first day we’re going to be able to acquire some players. We had a top five pick; we knew we were going to get an excellent player. Now we have a chance to get a couple more players here in the second round and an early pick in the third round, and we need to address some areas on this football team for the immediate future and for the long-term future, and I think that’s perfectly obvious.”

(On the benefit to Adams of having veterans such as Simeon Rice around) “I think we’ve got a great room for him to really flourish in. You talked about Simeon Rice – the addition of Kevin Carter, who’s one of the truly great pro football players in the league – he’s in great shape, he plays every Sunday and he’s a great leader. Chris Hovan, Greg Spires – there’s a real good environment for him with good quality pro football players to learn from. And not just playing the game but how to prepare to play the game on and off the field. And I think from a role model standpoint he’s in a great environment to really take off and flourish. Larry Coyer is going to do a great job with him, and as you all know, Monte Kiffin is one of the best in football.”

(On what separated Adams from the other defensive linemen) “It’s tough. Amobi Okoye is a guy we coached in Mobile, and we liked him a lot. We certainly did, and to get a disruptive inside presence is something that you’re always looking for when you’re running a 4-3 defense. But the pure pass rush separated Gaines Adams just a little bit. And it was a tough call. But again, we got a guy we really think has a tremendous upside and a great future as a pass rusher. And we need to improve our pass rush. I think we all know that.”