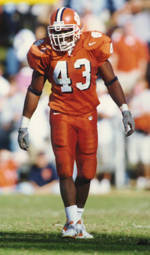 Adams On Display At College Football Hall of Fame

CLEMSON, S.C. — Clemson linebacker Keith Adams is one of 10 active players featured in the “Race for the Pantheon 2000” exhibit at the College Football Hall of Fame in South Bend, Indiana. The display, located in the main exhibit hall, includes Adam’s jersey and photos of the Clemson junior linebacker. It was unveiled this weekend.

The “Race for the Pantheon Display” features what the College Football Hall of Fame considers to be the top 10 players in college football. Adams was the only linebacker listed and is one of four juniors involved. He is a first-team preseason All-American for 2000 after earning All-America honors last year as a sophomore when he led the nation in tackles for loss and total tackles.

The 10 players Featured in the exhibit are: